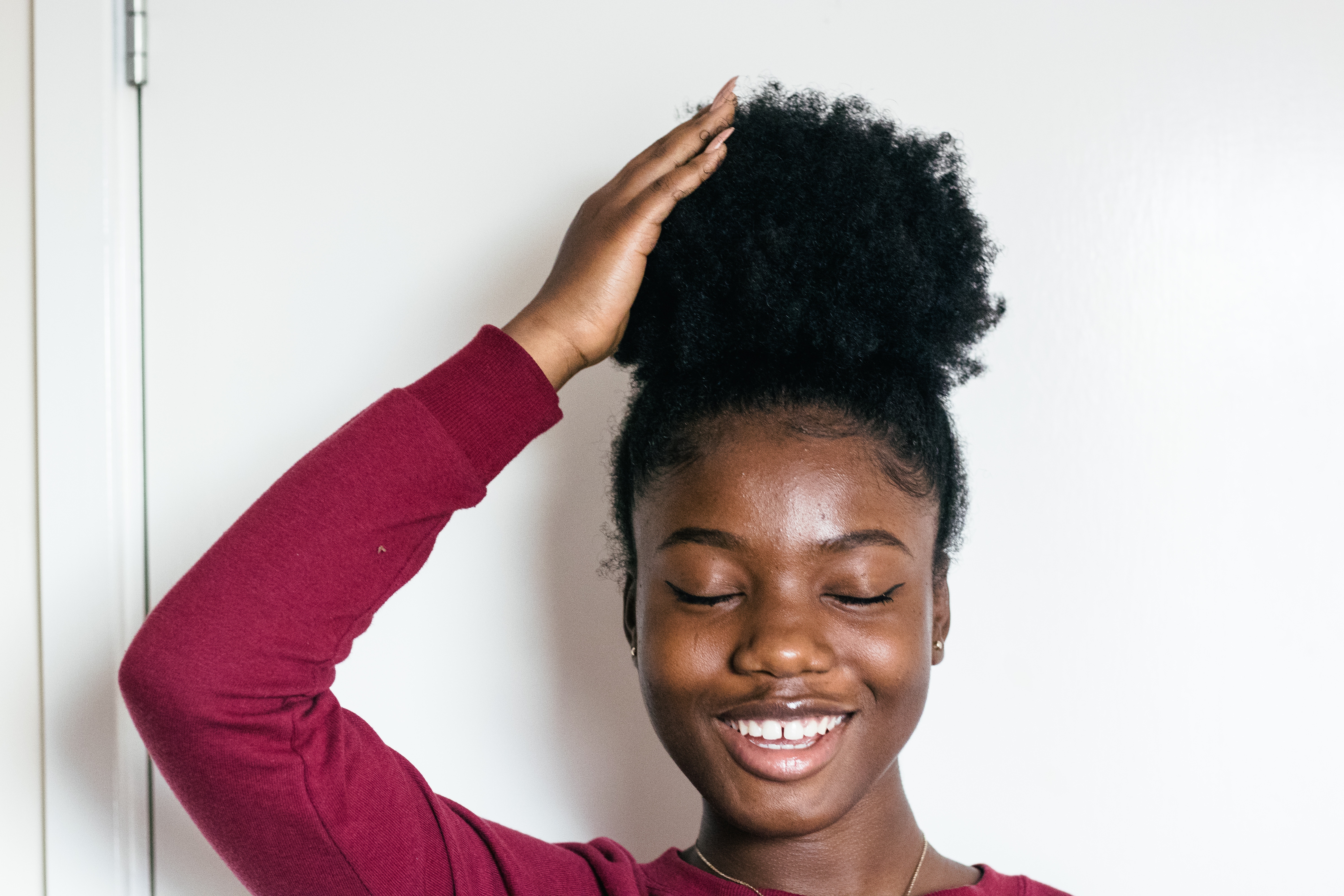 I don’t know how to say this gently so I’ll come right out and say it – I’m balding.

Smack in the middle of my head, right here are the top of it, a few inches down from my hairline, the spot where the sunshine or a light bulb would hit, I have a patch of thinning hair.

If I’m seated across a table from you – either we’re chatting over a nyama platter or drink at Coco J, maybe sharing a workstation at Nairobi Garage or I’m getting a magazine story from you – you’ll see it when I bend my head forward. Doesn’t matter how slightly I bend it. Doesn’t matter how I angle it against the lights. Doesn’t matter what time of the day it is or what music they’re playing. Doesn’t matter if you’re squinted or cross-eyed or as blind as Victor Korir, you will see my bald.

(The fact that I’m referring to it as ‘my bald’ sort of suggests I’ve made it mine, that I’m owning it. And I think I am. I am. This is my late adult handicap and I’m going down with it with pride. I’m a balding woman, people.)

Waiters see it when they’re standing beside the table to take my order.

The barber sees it when he’s standing behind me to wrap that smelly polyester protector around my neck.

Conductors see it when they’re hovering about asking for bus fare.

My opponents, nay enemies, see it when we’re fighting it to the death with Scrabble.

Muna sees it when she’s sitted on my shoulders, watching TV, with her arms around my head and her ankles choking the life out of me. And she’ll ask in that pitchy jerky way she does when she’s concerned but humoured, “Mummy, what is that?”

GB sees it when I’m taking…. (OK, you can fill in the blanks there.)

Friday I was at a hairdressing parlour in Kampala Business Centre downtown interviewing a chick who styles natural hair. Her name is Shee, she runs a page on IG where she uploads her work, @kinkycurls_fros_hairstylist. Shee was nominated last year for Afro Hair Awards, under the category of ‘Afro Natural Stylist of the Year’.

Before we sat down to chat, I asked Shee what fun style she can do with my short hair. I was swivelling about in her salon chair. She stood behind me for a long time saying nothing, staring at my bald, my bald staring menacingly back at her. I imagined she would run out to call another hairdresser, and another, then another. Then without warning, I’d have ten hairdressers standing around and looking down at my bald, murmuring in pitiful whispers as if they’d seen the antichrist spawning from my fro.

She exhaled, sounding defeated, as if I’d asked where snails come from. She said, “It could be genetics, or styling damage… maybe alopecia.”

That’s the politically correct urbanite term for balding. Balding sounds like an obese unhealthy man from the 90s. Like Homer Simpson. Alopecia sounds uppity, cultural and acceptable. A shortcoming you’re proud to have. A sexy chink in your armour. It’s like saying you have anxiety. And you cap it with proclamations like, “I smoke weed to calm my anxiety.” Or, “I meditate and do yoga to manage my anxiety.” And, “Expressing my art is part of therapy for my anxiety.”

Kim Kardashian says she has alopecia. So does Tyra Banks. And Viola Davis from ‘How To Get Away With Murder’. Donald Trump. And Wayne Rooney. As you can pick from the mentions here, it’s a first-world problem. Africa we’re here dealing with hunger and disease to knot our knickers over alopecia.

Anyway, Shee suggested I see a trichologist, someone who specializes in scalp and hair loss. “I’ve WhatsApp’d you the number for Dr Muli. He’s at a clinic on Ngong Road called The Hub. He’s one of the best.”

“And what will Dr Muli do for me?”

She shrugged. “I don’t know. He’ll test for genetics… maybe advise you to get a hair transplant.”

I laughed out aloud. “Guys in Nairobi are doing hair transplants now?!”

They are. We’re doing hair translates. Getting shots of botox. Butt enhancement creams. Breast reconstructive surgery. Turning our skin to the colour of butternut. I won’t be surprised to learn our banks are advancing loans for surgically-enhanced beauty. Jeremy Awori seems like the kind of chap who’d be down for such an urban product.

Anyway, I feel I should be worried about this… this… problem, but I’m not. I shouldn’t be making a joke about it either. Women in this town too insecure to take off their wigs and undo their weaves are having sleepless nights about their bald. Others wouldn’t be caught dead without braids. I’ve seen a handful at the swimming pool at Ole Odume and at my old gym suffer through workouts in turbans.

And not to mention, you imagine you’re still single because you’re bald.

Friday night, you’re lonely in the digs, without a plan, phone in hand. He’s blue-ticked you and you can see him online but it’s been hours (OK, four minutes… and counting) since his last response.

So you think to yourself, “I shouldn’t have let him get so touchy. He felt my bald head and won’t call me back again.”

“Maybe he was laughing at my jokes because the joke was on my balding head.”

“Ghai, can I let him see me without my weave?”

I’m thinking about my own bald and who to point the finger at for it.

I want to point it at Adhis, that hairdresser at the top-most floor of Kenya Cinema who dressed my hair for many a years in my 20s. She’d pull my locks in a tight bun until I got Chinese eyes. And she’d have me sit in the furnace of a drier, in a halo of heat. There’d be so much white smoke you couldn’t see my face. You’d think it was the Papal conclave at the Vatican all over again. And I’d tell her at the top of my voice, “Eh, Adhis, si umeweka moto ya juu sana?”

Then she’d casually brush me off as she turned the heat up by two notches. Having me burn as if I were in hell while she belted out her gospel tunes.

I want to point it at Charles Darwin and his silly theory on natural selection. I feel that evolution has chosen wrong. I don’t want to have been the hand-picked one from my gene pool. Has nature taken away my hair because it wants me to ‘compete, survive and reproduce’? Am I the only one from my family tree – me and the 20 plus others who’ve inherited this thin hair from my Ol’Man’s side – going to live up to 120? ‘Cause I don’t want to live to 120. I’m happy with 70, thank you very much. Unless they reincarnate me as Chadwick Boseman then I’d reconsider those 50 extra years.

I also want to point it at industrialization. All that shit we put in our hair when we were kids, the Pressol and TCB and Satin Sheen. These hair pomades – hahha – were probably our undoing. Nowadays I only use water and natural castor oil in my hair. I never know if I’m doing it right, though. Alex, the Hair Master in Hurlingam, told me I’m not applying enough. My little sister told me I’m applying too much, that I’m drowning my pores, I’m suffocating them in oil so they can’t even breathe. Can somebody set the record straight here?

I’ve looked alopecia up on Google. They say there’s a derivative of testosterone (oh yeah, testosterone, the male hormone, the one that makes men manly) which triggers premature balding and hair loss in women.

OK, hang on, hang on. Am I balding ‘cause I’m manly? Am I losing my hair ‘cause I have some elements of manliness in me, some exhibits of masculine traits? Is being assertive and driven and forthright making me bald? Jesus.

They’re also saying it could be because of menopause. I don’t know, I’m 34, maybe I could be slipping into early menopause? You can never be too sure about these things. Girls are growing breasts and starting their period when they’re 10. What’s my argument for ruling out early menopause?

Anyway, the only person I feel really bad for is GB. He got the short end of this stick.

He married me with a healthy head of hair and no sooner had the ink dried on our marriage certificate than I shaved my head and begin to bald.

His hair is graying with age and I’m balding. How unfair is that?

I hope he doesn’t leave me. Or make a caustic comment about it next time we’re having a tiff.

Maybe he’ll set up fake account on Facebook, as a Njoki Chege or someone, so he can join Tricia’s Naturals group to collect tips for me. Or we’ll be catching ‘Marlon’ on Netflix, and he’ll casually ask if the hair on all the women on the show is real hair. Maybe he’s thinking, for my birthday in October, to get me a shopping voucher for Verushka Wigs in Westy.

That’s not the worst part though – for all we know, he just may have married a balding man.