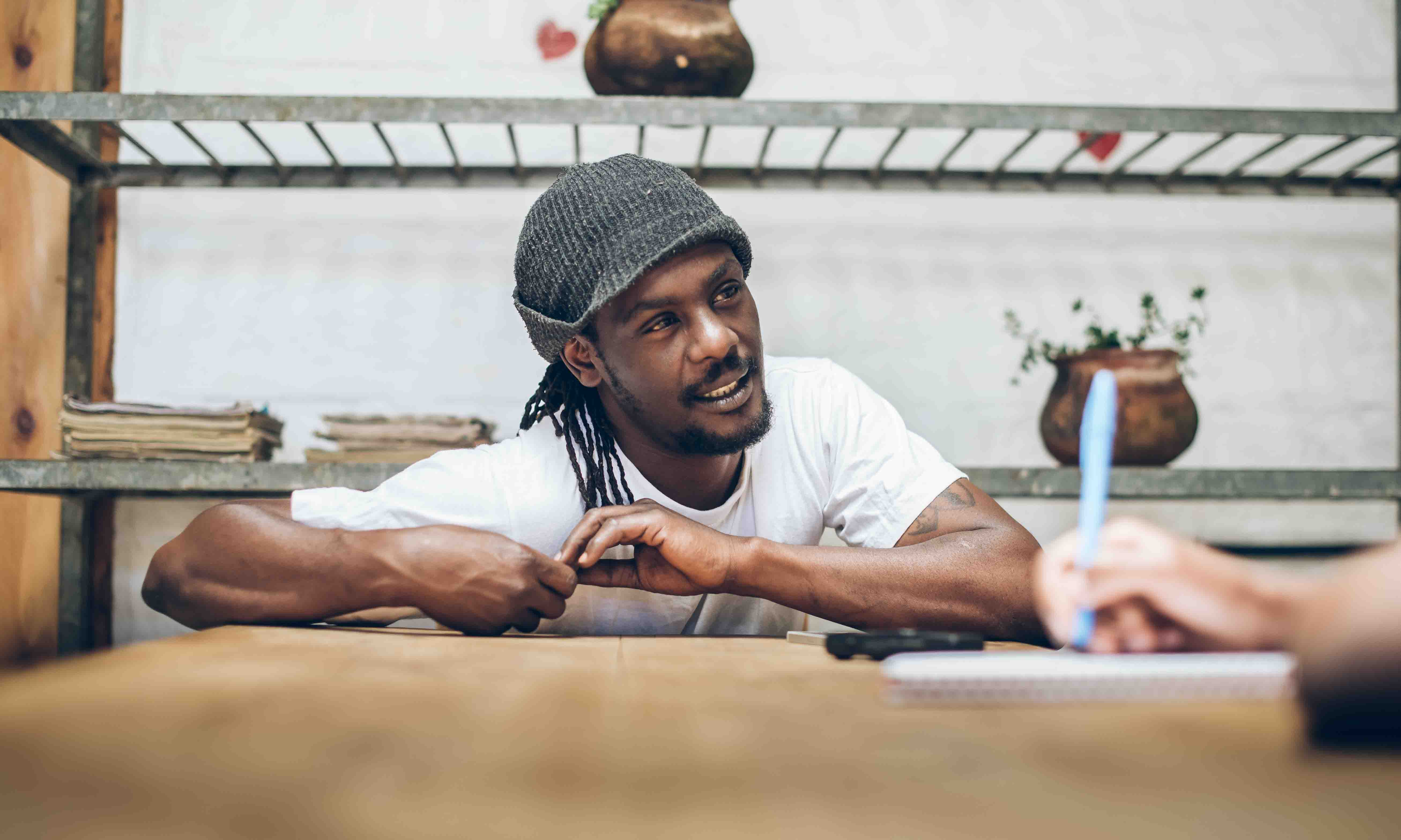 Kitchen Confidential: a miniseries about Kenyan chefs in Kenyan kitchens

AS TOLD TO BETT KINYATTI

Last night I made my 11-month old son a dinner of fish, mashed potatoes and broth. The broth had onions, garlic, basil, rosemary and a tiny pinch of salt. No spices. I’d marinated the fish. I pureed it for him and put it in his bowl. He loved it. Cleared his plate. Sometimes I hold him in my left arm when I’m at home cooking and he usually goes very quiet.

I left for the UK when I was 19. It was in the early 90s. I went to a college of culinary arts for two years then started working as a professional chef in a commercial kitchen when I was 21. The legal age in the UK is 16, that’s when they leave home and get jobs. 21 may seem young to you but I was a little late to the party.

Every element in this Kitchen is deliberate – those jerry cans with the tops cut off, the bell, the pastry display, the jikos, the sufurias, the kiondoos hanging on the wall, the mabati roof, the wooden handmade furniture, those piles of old newspapers. The boots holding the door open are the boots I wore in the year I was farming, the year the Kitchen closed.

I listen to a lot of music. A lot. Different genres. Many different artists. I had a roommate who was a bass guitarist for a band. He influenced me and my love for music. The music reflects the phases in my life. When I was starting out as a chef in the UK, when I was 21, I loved the 60s classics – Jimmi Hendrix, Ottis Redding…. I had them in vinyl. Then I had a jazz phase, listening to artists like Miles Davis. Then what they called a ‘black music’ phase; a lot of hip-hop and reggae. Two years ago I was listening to a lot of country. Now I’m listening to more uplifting house.

The kitchen is where my heart is.

I never thought I’d have kids of my own because it looked to me like a lot of commitment and responsibility. But you can’t see someone’s experience and call it your own. My son is teaching me a lot of patience.

‘Conversations With God’ is a book I’ve been reading for the past three years. It has changed my life. I’m on book two now. You should read book one. I was a different person before reading it. Yeah, yeah… you can say I was a bit of an ass before. How I asked people to do things was in a different way. Like the stairs there need sweeping. Now I’d tell the waitress to just sweep them, back then I’d have said [he mouths some bleeping profanities I can’t publish here.] I can’t say that the kitchen wasn’t doing well – it was – but there was a high staff turnover.

The chefs here don’t have a uniform, we work in these white t-shirts because it’s hot in the kitchen, with our mabati roof and the road construction going on right outside our door. The t-shirts are comfortable. I want my chefs to be comfortable when they’re cooking. None of them are college-trained, I taught them how to cook.

I grew up in a farm in Kanjeru, it’s not far from Kikuyu. We worked on the farm, all six of us plus my mum and dad. We milked, fed the cows, dug the shamba… My dad had a massive flower farm in the compound, I’m the one who took care of the flowers. He loved his flowers, he’d even labelled them with those scientific names. I don’t remember which one was his favourite, though.

It’s better to be than to have. Because when you have something in your hands, you hold tight to it like this [he cups his phone and puts it close to his chest]. What this means is that you didn’t have it in the first place, and it can be taken away from you. So when you ask me, I don’t say I have happiness, I say I am happy.

There’s a section from ‘Conversations With God’ I’d like you to read, about how to ask God for things. Let me get it. [Moments later] Here, read these paragraphs, start here…. “You will not have that for which you ask, nor can you have anything you want. This is because your very request is a statement of lack, and your…” [I read it to the end then we discuss it at length with Chef Tom and Mburu, the photographer.] 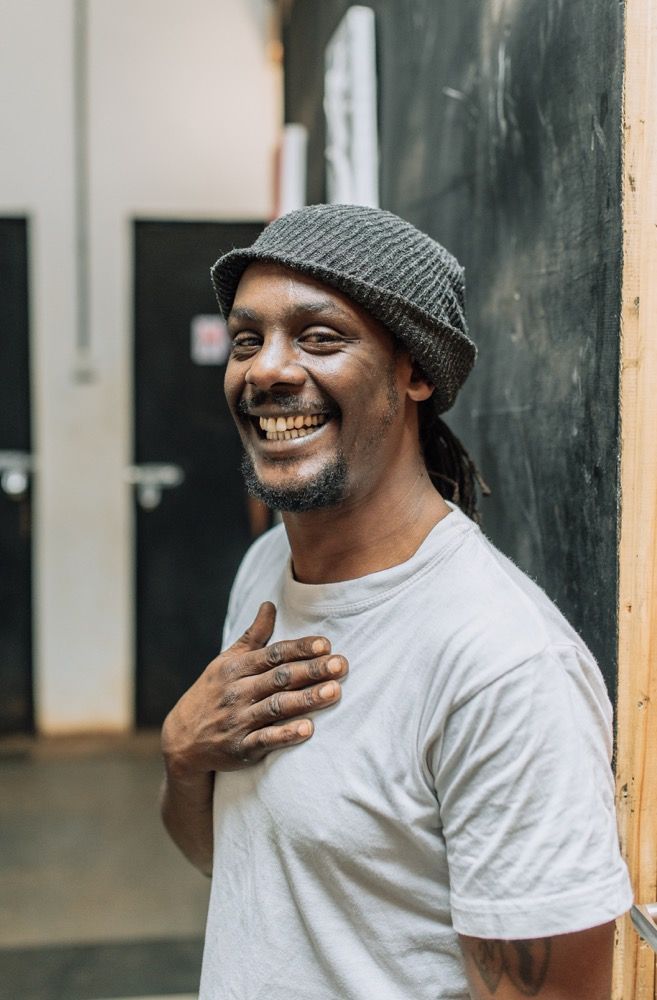 I ran a sandwich shop in London for three and half years. It was called My Lunchbox. It was located in a posh white area, and strategically near an underground train station, a college campus. House of Parliaments and Buckingham Palace weren’t too far. I had a staff of four. I loved it because I was able to do what I wanted to do. And I learned to understand people; how charming them can get you far. Most popular was the pork sandwich with crackling applesauce.

I work in this beanie because of the dust and heat from the kitchen. My son takes it off my head when I get home in the evening. I don’t know if you’d recognize me in the streets if you saw me without it on.

Everything comes at the right time.

I didn’t like working in our farm at home. And you know how kids are, you think farm work is dirty work, that it’s crap, or that your parents don’t love you. Ha-ha. I went to school in Westlands. When we got there in the mornings, I’d change out of my muddy shamba gumboots into leather shoes. And I used to have soil under my fingernails. [He chuckles] I remember, when guys would say what they’d do over the weekend, maybe go watch movies or hang out, they know I’d be doing shamba work.

The best meal I’ve had in a long time was at Tin Roof Café, it’s in Karen. We had beef burgers but instead of fries he’d served it with a selection of three salads. I’ll try that here someday.

I worked under Chef Ramsey for a while. Yeah, the chef Ramsey. Mad genius. He’d put steak in dessert and it would work. We didn’t cook to music. You couldn’t have your phone ring in the kitchen. He could humiliate you until you cried. There was a lot of wastage in the kitchen. Theirs were two and three-star Michelin restaurants and they had to maintain that standard. Say chicken, it had to be a perfect square. I remember the pain the first time of throwing away chicken that still had meat on the bones. ‘Cause you think about where you’re from, in Kenya, where people sometimes don’t have food to eat.

All our food is seasoned with love.

Crave is not a restaurant, it’s a kitchen. I didn’t want a restaurant that had white tablecloths and fine dining, that’s intimidating to diners. I wanted it to be down-to-earth and have a connection with people, even the locals. To make you feel like you’re in your mum’s kitchen or you’ve gone to shagz. And I wanted to cook food differently, to experiment. I wanted to cook it how I felt like cooking, I didn’t want to do things because this is how they’re properly done.

Once you have the idea and learned the concept, then you experiment with food.

To be honest there was a bit of shame in working in the farm as a kid. It dented my self-esteem a little but… looking back… it was a minor issue. And all that shaped me to who I am today. Maybe I wouldn’t have become a chef if I hadn’t grown up on a farm. I still live on a farm. And I’m still a farmer. These days it’s cool to live on these sides of the city and on a farm. 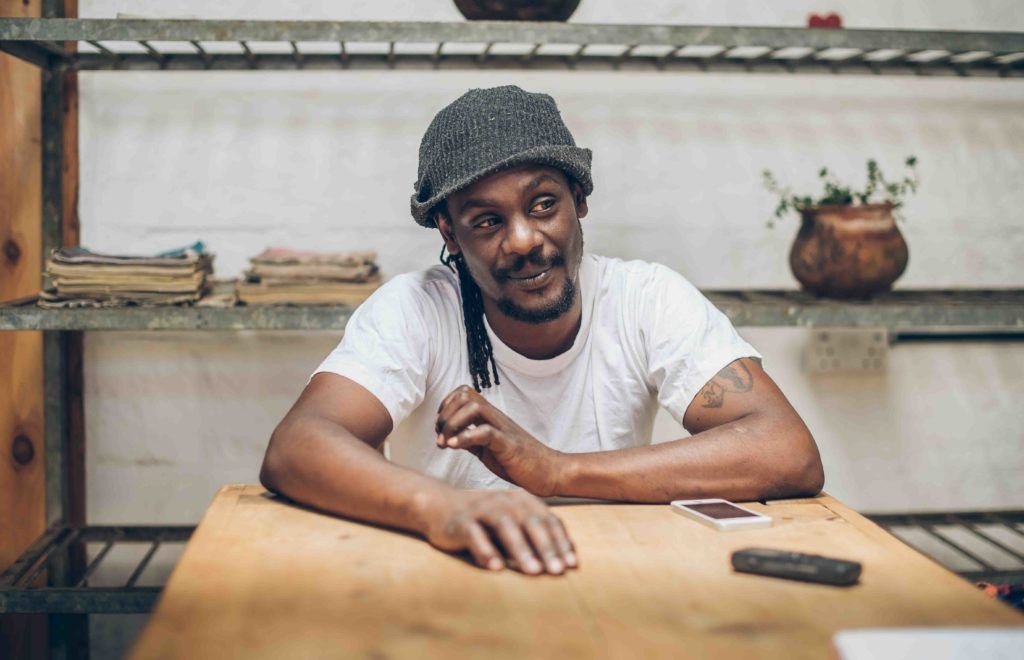 I opened Crave Kitchen when I came back to Kenya early 2014 [at 39], but I had the idea long before then, around 2012, when I was running My Lunchbox. I’d even imagined what it would look like, how rustic it would be. You can’t have something if you can’t imagine it. I remember when I did the interiors for the first Kitchen, I’d chosen black and white tiles for the floor and an adventurous red for the walls, I was so nervous about what people were going to think. I toned the colours down when we moved here.

Running My Lunchbox taught me the business of being a chef.

The music we play here is from the playlist on my laptop. It’s right there [on a high shelf of the wall separating the kitchen from the dining room]. Food goes with music. Earlier in the morning you heard some jazz, Grant Green is cool, then indie folk from Alexrainbird. Then a little country. By the time it gets to lunch the mood needs something more upbeat, maybe some funk or rock. Not hip hop [he whispers to the manager to remove the Missy Elliot playing]. Sometimes we also have lingala. Evening we mellow down for sunset and dinner.

Is your voice recorder still on? [He picks it up and speaks into it chuckling] Is this thing still recording?

We’re setting up something in the garden. Some wooden pizza ovens and grill for slow-roasting meat. Come when we open. I also want you to come into the kitchen next time and cook with me.

The Kitchen closed unexpectedly for a year. They’d started construction for the southern bypass and my landlord was asked to close shop. So we closed shop. It was depressing for me and a big blow to the business because it had just started picking up. I went into farming to keep busy. I grew tree tomatoes, spinach, cabbage, potatoes…It’s that year, in 2016, that my sister told me there’s a book I must read. I was hesitant at first. But when I did, I haven’t put it down since. ‘Conversations With God’. I read it every day. It’s like my Bible.

I feel like trying something different today with these plums. [He has a bag of plums he’s deseeded and split in half on a plate.] I’ll bake a plum cake and maybe a plum custard tart, see how that turns out. Then, I don’t know… I’ll see. [Much later, for lunch, I find some glazed plums in my mbuzi fry.]

All images are by Mburu Muruthi for Craft It. Image copyrights apply. None of these images can be used elsewhere without the express permission of Craft It.