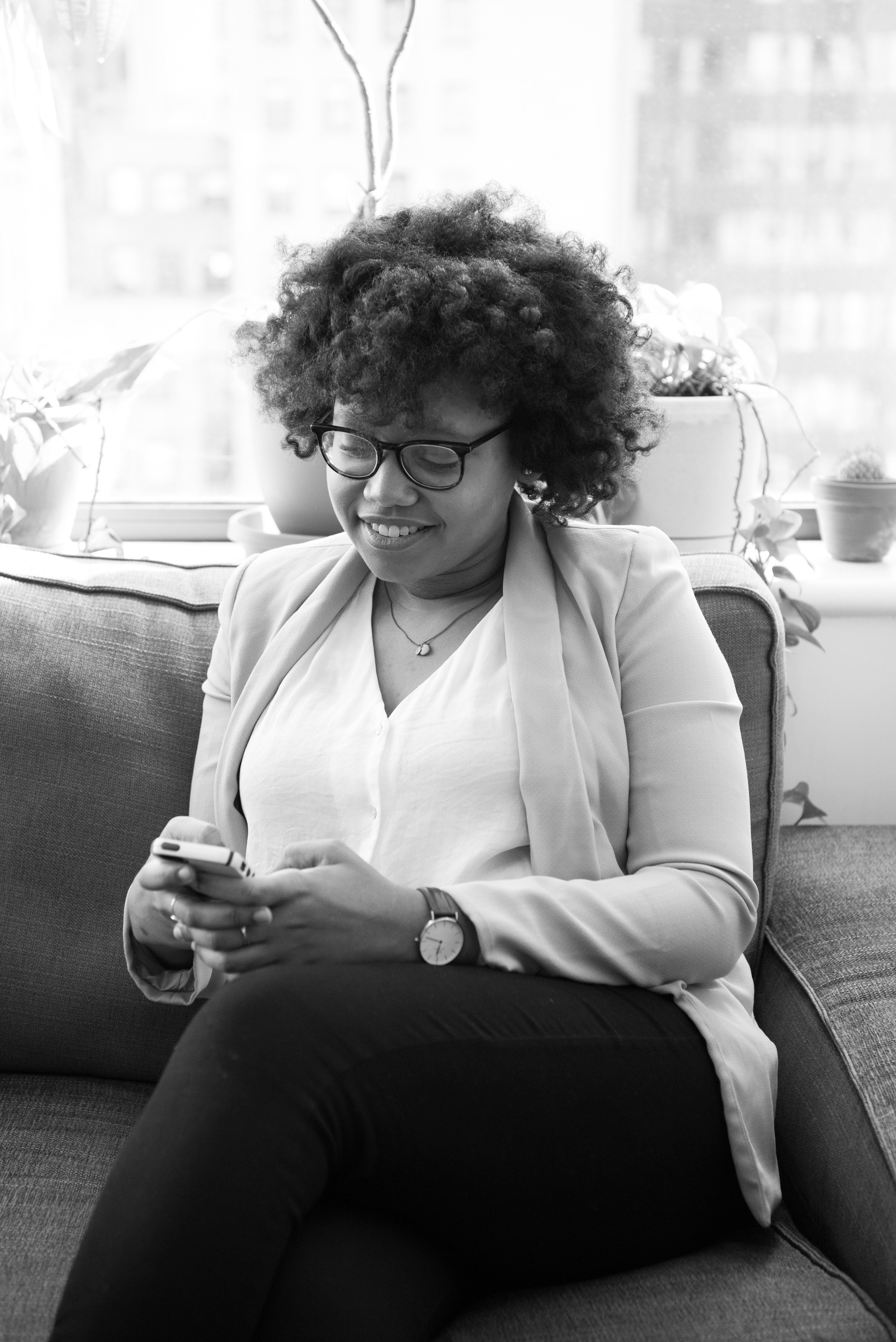 “Because life for me is made up of whys and why nots. But why not is not a good enough answer. It’s a shortcut. I like finding out why things are the way they are. If someone does something to me, I’d like to know the background. I like knowing backgrounds. Maybe that’s why I like history, ‘cause you get to know what led up to that action.”

This millennial asks to neither be named nor photographed. She’s 24.

She keeps her voice low and her shirt rolled up at the sleeves. She keeps her curly hair short. And keeps only a small number of friends. “I have a semi-circle of friends,” she says. “I think that’s what I love about me. I feel like I don’t have to try. I have friends who wouldn’t think I’m weird if I did something.”

We’re seated in a booth on the upper floor of Gloria Jean’s Coffee, along Koinange Street, against a window overlooking the flower stalls at City Market. She looks at the flowers without saying a word. Moments pass. Then, more to herself than to me, she says, “I think I’ll buy my Mom flowers after this.”

It’s Saturday today. On Friday she woke up feeling lightheaded. She thought taking a shower would make it all better. But she could barely reach her bedroom door. She lay back in bed and sent a text to her office Whatsapp group: Good morning, I am not feeling well today so I won’t be in the office. I am however available on phone and emails.

A trip to the doctor revealed she had a bacterial infection.

Right now she has a dry cough. She wants something to burn her throat. She orders a dawa while I go for an overpriced mango smoothie. Every few minutes she takes out tissue from her bag to blow her nose.

On January 29th, 2018, at 23, after graduating from USIU with a degree in International Relations, she went corporate, landing her first job at DAN, a branding and digital marketing company. She started out as the CEO’s PA, learning the ropes, writing reports, getting CC’d on the CEO’s emails. In September she was assigned her first big client, Coca-Cola.

“Initially I didn’t know media buying. I also learnt media planning on the go. Everything was urgent. And then I’m thinking, ‘OK, I’ve never done this before but I’ll figure it out.’ So yeah, after that I was just gliding through. There are many rough spots. Now I’m on Coke, and Kingsmill [bread], and Chrome [vodka], and J & B whiskey.

“At the moment I don’t really know what my JD is. I find myself in two worlds: the client service and the trading, which is basically the media buying. I’m still the one in contact with client and I’m still doing the buying and the planning.

Every time she doesn’t have a direct answer to my questions, she says, ‘that’s a good question’, then she thoughtfully turns to the window.

“How long do you plan on staying at DAN?”

Her dawa finally arrives. It comes in a tall glass of lemon water and a tiny bowl of honey. She picks up the bowl and lifts it to her eyes like she’s doing a chemical experiment. “This is so interesting. It has particles inside. Is it weird that I want to bite the particles?”

She dips her pinky finger into the honey, licks it, then empties the bowl into the lemon water. Honey tumbles down the glass like dust-colored ink. Then she stirs the concoction, ever so slowly, ever with grace, like a secret ritual performed in honor of the bees responsible.

She thinks it over for a moment. Then she smiles slyly from the corners of her mouth. “That I get a representation of how life is.

“You rarely receive what you give. If you think people are going to be nice to you because you’re nice to them,” she shakes her head, “it’s not going to happen. And at the same time when you think all hope is lost, you’ll still find those people who have some humanity in them.”

“And what do you hate most about your job?”

“I feel like a fish out of water. Or an eagle being forced to swim. I feel like I’m not in my element at all, and every day I’m forcing myself to bend to the point where I’m afraid I’m going to break.

“I know in life you’re supposed to be flexible and I like that I’m learning a lot of things every day. But the thing is, I don’t think learning is ever going to end. And I don’t like the environment that is being created in the name of learning.”

She sighs. “Sticking at one place thinking that I’m there because I’m learning, I think is not a good enough reason. That’s what I hate the most about that place. I feel it’s completely different from how it was when I joined.

“In the beginning I was like, ‘oh my gosh I’m so excited.’ Bearing it all, giving everything, even what I don’t have. [But I learnt] Not everyone has your best interest at heart. Everyone else is thinking about themselves, trying to get ahead, which is how life is in this capitalistic setting. Everyone else is a means to your end.

“I feel like it took a 180 degree turn. And now it’s like I’m struggling to breathe. You have to teach yourself how to breathe in that environment.”

She spent her first salo on her family. She took them to Baobox, in Westy, where they played board games. “They have all kinds of board games, and they charge for it, which I found out that day.” She chuckles.

“So how much did you spend that day?”

“That I cannot forget. I still have the receipts. I spent 17,500. I remember my cousin was asking for more juice and I was like, can you slow down? Ha-ha. When I saw the bill I sat down for a moment and thought about my life. I was like ‘oh shit. Wow. How can I recover from this?’”

We laugh. I ask, “Would you want to be the CEO of the company?”

“Not this one.” She shakes her head. “There are those who know the digital space is where they want to be. They’ve already mapped out their path. But for me I think this is one of those things that I just jumped into out of curiosity.

“I liked the idea of it. I liked the theoretical part of it, which was cool, obviously. But at the same time, by the way, this is another thing. Some of the things I told myself I’d never do are the things I’m doing.”

“After clearing campus, I did a short marketing course. We got to digital marketing and I zoned out…print, TV, radio, all that stuff. I was just looking at them and thinking, ‘what the hell are these?’

“But I paid most attention in the advertising class. Strategy and account managing, those things. But it didn’t help that the lecturer was boring. He wasn’t helping much, and I was like, ‘ah, anyway, I’ll never find myself in digital marketing.’ Now here I am.

“I have learnt not to say never.”

She takes her first sip of the dawa, shuts her eyes and places a hand on her chest. “Aah, that hit the spot.”

I give her a moment to have her moment. I wish my mango juice would do to me what her dawa is doing to her.

I ask, “What do you usually have for lunch? When you’re at work?”

She seems taken aback by my question. “On workdays I eat chapos. I walk out of the office and up the slope of a backroad, into a kibanda. A chapo is 20 bob. I take two, either with ndengu or beef.

“What motivates you to get up every morning? Is it the chapos?”

She grins. “Possibilities. Sounds cliché but yeah. Every day I’m like, ‘God just go ahead of me. It’s a new day. I present it to you.’ Of course I’m praying for protection over my entire family, but I’m just glad it’s a new day, presenting itself with different ways of doing things. The fact that I’m alive motivates me.”

How does your spirituality play into your work?

“That’s a good question. Uhm…” She exhales. “I take everything in moderation. In the agency it’s very easy for you to go to the extreme. In agency a lot of people binge drink. Almost everyone smokes. I guess it comes from the territory. How demanding it is, so you’re trying to look for a release.

“But I’ve never been a fan of that life, going out. If it’s a work thing, I’ll make a technical appearance then go home. I’d rather meet up with a friend and get a zinger burger than go out and spend thousands of shillings for a hangover.

“In a sense my spiritual values have taught me how to step up.”

Our girl has finished her dawa. She’s now thinking what kind of flower to get her mom. “She’s my best friend. She’s an amazing, phenomenal woman. Also a traditional African woman. She’s always been there for me. I mean I’m thinking of buying flowers for no reason.”

What do you mean ‘traditional African woman’?

“A traditional African woman in the sense that, if you break a glass they say, vunja yote. There’s a hint of how they were raised and how they’re raising their children. It’s like if you want to leave the house, you’re ticket out is doing house chores.”

And do you think you’ll be like your Mom?

“I mean the apple doesn’t fall far from the tree. So inasmuch as I’m going to say I won’t be the same way, you have to come from a point of knowing this is how I was raised. Some of those traces are never going to go away.”

As she decides whether to go for lilies or roses, I ask what’s next for her after leaving DAN.

“When I was a kid, I was asked what I want to do. And I said I wanted to start an animal shelter, because I didn’t like seeing animals being rained on, the same for people. I used to cry so much.

“I like to think I did IR for a reason. I’ve always had hope in humanity. Even my high school yearbook quote was, ‘I have too much faith in humanity’. I can’t shake it off. I want to work on that. That’s what next for me. It could be in the humanitarian space, or NGOs or whatever, but that’s where I’ve always been.”

For now, though, this millennial is off to buy some flowers.
—-
Mike blogs at mikemuthaka