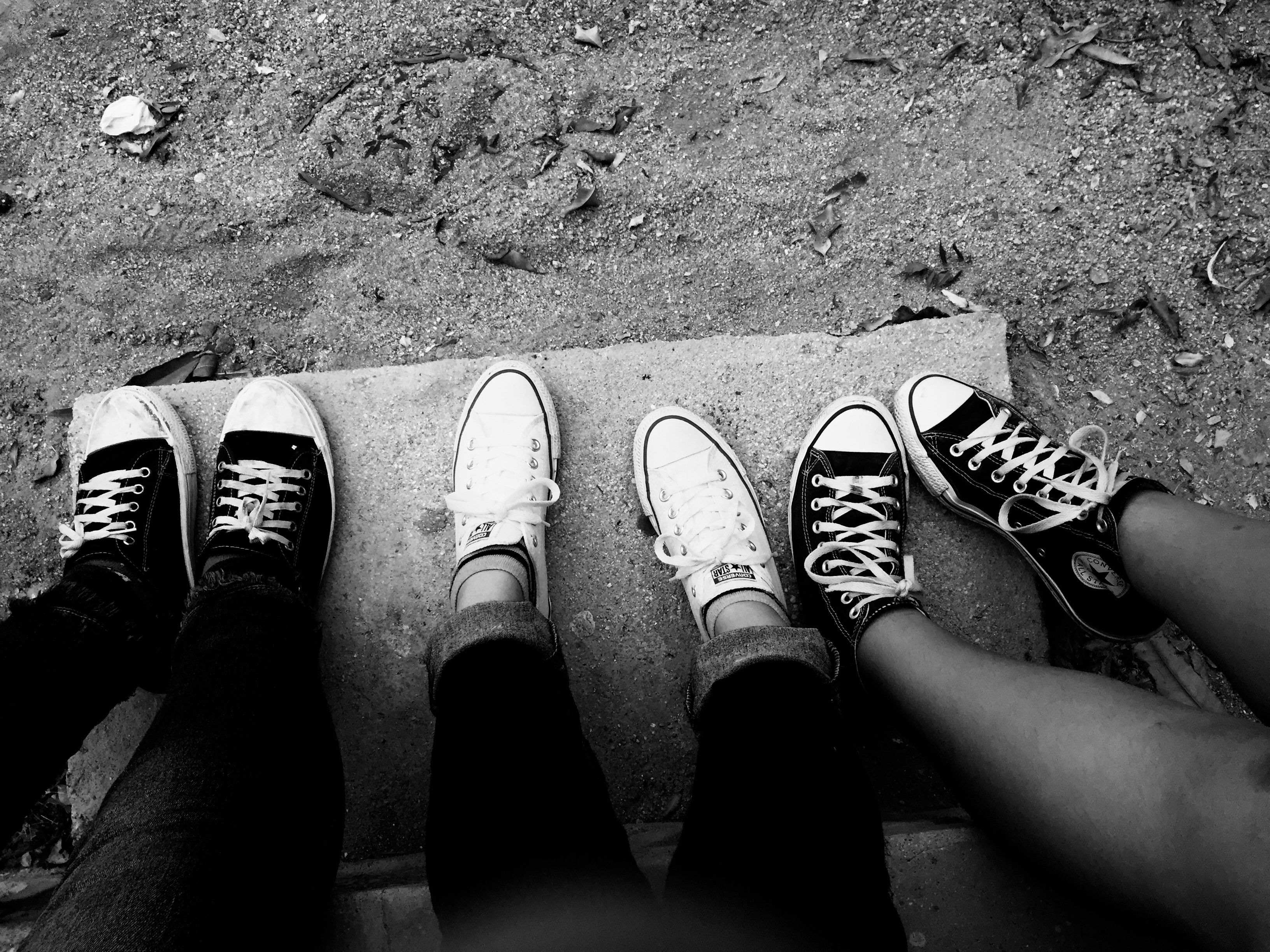 Two things:
One: (I need to post this story but I’m truly struggling with the intro. I’ll fill it in later, after I’ve stringed my thoughts better together. I was saying something about Netflix and Castbox and Spotify. And how you can tell where people’s heads are at from the footprints they’ve left behind there. At some point the idea of a chef’s ingredients in his pantry came into the picture, hahaa, but I put it aside.)

Two: Do you notice how snobbish a writer sounds when they’re talking about the books they’re reading and they go around dropping author names? [Insert snotty accent and a pinkie raised in the air] ‘Ham On Rye’ by Charles Bukwoski’. Or, ‘The Artist’s Way’ by Julia Cameron.

Dropping author names, I feel, talks down to the reader. Makes them feel like they are not as exposed, as cultured and as disciplined as you are. As though they are talking down at you.

I only read Kindle.

These are the three books currently on my bookshelf:

His folks are immigrants from Germany, Henry is an only child. His Ol’Man is a jobless delivery guy, he dresses up every morning and drives away in his car because he doesn’t want his neighbors to think he’s without work. He’s big on putting up appearances. His mum is a stay at home mum.

Henry is… growing up. And you know how growing up is a difficult thing for a child to do, no?

You don’t who you are and what you’re not, what you like and what you don’t. Everyone around you – your folks, teachers, siblings, pals – is constantly pushing their proclivities down your throat. You gradually develop a distaste for these things because they were forced down on you.

That’s how rebellions are birthed.

(I swear I had an illustration for this but I can’t recall it.)

Anyway, what’s truly heartbreaking about this book is how Henry’s dad needles him until he (Henry) is without a sense of self or personal worth. This particularly unsettled me because I understand, first hand, how the words that come from our mouths as parents can build up or break down our kids.

Henry at some point thought to himself, Surely, these can’t be my parents. I was adopted and they don’t like the person I’m becoming.

There were regular beatings at home and fights at school. Henry grew angry, aggressive, churlish and easily sparked. Dark energy that birthed only more dark energy.

I kept reading because I was rooting for Henry. I wanted him to have a win. Any win.

The arc of the narrative took on a less weighty, less dark tone when Henry was in 4th grade (how old is that?) and the only things on his young mind were babes, breasts, booty and booze.

Then there was wanking, lots of it. And severe acne. And cigarettes. Temp jobs. Running away from home. Almost joining a street gang. Dabbling at college. Making and dropping pals. More pointless drunken brawls to nurse his broken spirit. Hangovers. World War II.

Does Henry get a win at some point down the line? Does the underdog triumph?

Read the book to find out.

Here are some quotes from Henry’s story that cracked me up:

“Her breasts were something that no mere mortal would ever see—they were only for kings, dictators, rulers, Filipinos.”

“A fat woman came out from behind the curtain. She had body odor. I could smell her strong odor as she walked past. Her smell was mixed with the smell of the church, which smelled like piss. Every Sunday people came to mass and smelled that piss-smell and nobody said anything.”

“After English class one day Mrs. Curtis asked me to stay. She had great legs and a lisp and there was something about the legs and the lisp together that heated me up.”

“We stayed quite a while and asked all sorts of questions about God. Like, how tall was He? And did He just sit in a chair all day? And did He go to the bathroom like everybody else? The priest never did answer our questions directly but still he seemed like a nice guy, he had a nice smile.”

“Why did I come here? I thought. Why is it always only a matter of choosing between something bad and something worse?”

“Your parents don’t give you much love, do they?”

The Artist’s Way
‘The Artist’s Way’ is a self-help resource for blocked creatives. It has tools to help them unblock themselves – an exercise a week for 12 weeks, free writing in the mornings (morning pages, she calls them) and taking your artist self on a date every week (what I call Play time).

I learned about this book from Patricia Kihoro’s comment section on IG.

I am reading this book because I’m curious about who we are as artists, but mostly because I sometimes feel cursed to be chosen as an artist.

I especially feel this way on the days when:
– I don’t have enough money to spend on the useless things that bring me joy
– I don’t beat copy deadlines
– I’m bored working alone from home
– I wear bad underwear
– I’m sluggish
– I’m testy from stewing in my own energy
– I’m anxious about my next necessary career/writing move
– I’m not confident with whatever I have written
– Whatever I have written and shared isn’t getting reader engagement online
– My workday begins closer to noon because mummy duties took priority and ate up my prime writing time in the morning
– I remember that print media is a sinking ship and I’m not pulling myself together to pull myself out in time
– My Daily Nation editors don’t run my stories

Early on in the book, the writer shares 10 basic principles, one of which is, “Creativity is God’s gift to us. Using creativity is our gift back to God.”

The Happy Sleeper
This book is a ‘science-backed guide to helping your baby get a good night’s sleep’.

And I like that, the use of the term ‘help’. It sounds gentle, optimistic and maternal. ‘This can be done, Bett. Your baby can sleep for 12 straight hours. Wipe that scepticism off your forehead with a handkerchief.’

As a new mum, there are three things you want to nail: your baby’s feeding, your milk production and your baby’s sleep.

This holy trinity of new motherhood. (I made that up. Feel free to use it wherever, whenever.)

What I’ve encountered from experience is that if you nail one of these three, chances are high you will nail the other two: if your baby is feeding well, he is stimulating your breast milk production and is gaining weight to sleep better at night and at nap time during the day. And because he’s sleeping better, you are sleeping better and are getting the rest you need to produce milk in excess and get up before sunrise to pump it out; you will have such excess that you can freeze some for later.

I totally nailed the milk production with Muna. I didn’t quite nail her feeding or her sleep.

In hindsight I couldn’t help her feeding, what I could help was her sleep.

And as much as I wanted to, I didn’t know how to help her sleep better. I remember when she was four months old, I brought her into our bed and she never quite left. And up until today – she’s five now – Muna doesn’t know how to put herself to sleep or how to return to sleep.

At bedtime, either me or GB will need to lay in her bed with her until she’s completely snoring. Sometimes, in the middle of the night, she will leave her bed, walk down the corridor in th dark and climb into ours. Like something of a night walker.

It’s sweet but at the same time it’s not.

You don’t want to sleep in the same bed with a toddler. They fart directly into your nose and it goes straight to your lungs. You’ll still be catching your breath when you feel a kick to your liver and an uppercut to your jaw.

Having a second baby is a second chance to fix what you didn’t get right the first time around.

My pal recommended I buy this book to help me nail Njeeh’s sleep.

I sort of felt cheated because I wanted him to need me more. Hahha.

Anyway, Njeeh is now six and a half months old, and is losing some of these capabilities.

I know – I know – there is something I’m not doing to help him progress. I have to go back to this Sleep Bible.

Now the next thing to think about is, how will I kick this thumb-sucking habit?