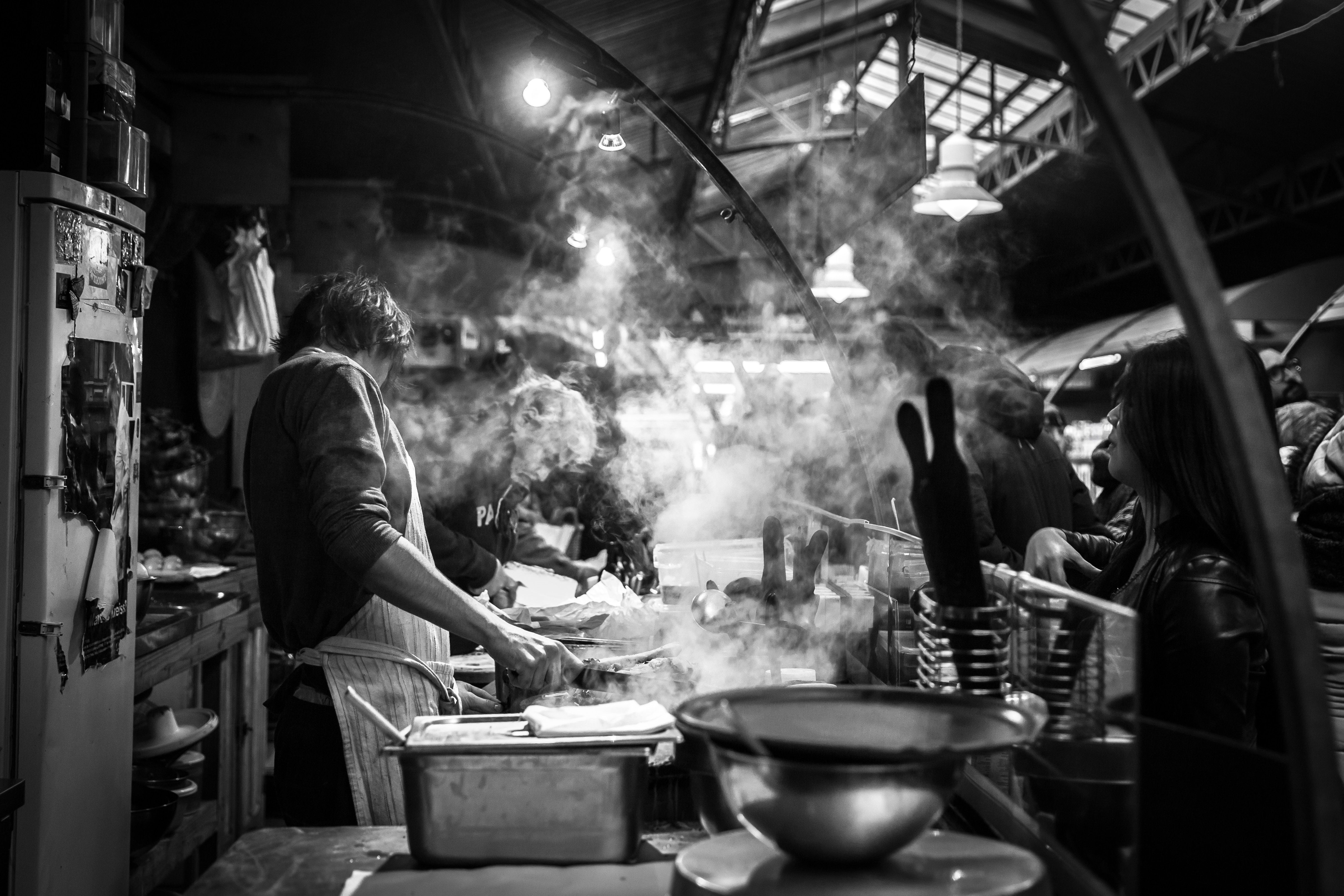 Chef Les – Lesiamon Sempele, executive chef here – walks up to me with the exhaustion of a surgeon who’s been in open heart surgery for 78 hours. Like something you’d see on TV, on ‘Grey’s Anatomy’. His hands hang helpless to either side. The look is his eyes is like something of a victory conquered, a battle won.

I’m where I’ve been standing for the past 15 minutes or more. To a corner of the show kitchen. I’d been in the back kitchen earlier. And to the alley beyond the backdoor, where I imagine the chefs nip in for a smoke or loose banter during non-service hours. Chef Les would later show me the cold room, and the condiments refrigerators, and that little swinging gate where EverythingFresh delivers fruit and veg every morning.

I’m the only one who’d been standing still. Looking out of place. Mostly mute. Nobody else in the kitchen had been rooted to one spot for more than a few seconds.

Kitchens at lunch – and dinner – service don’t function like that. Chefs themselves don’t function like that. Part of the requirements of the job is that you must be restless and be able to withstand the strain of working on your feet all day. A bad back wouldn’t cut it in the kitchen. A recovering fractured hip wouldn’t cut it. Neither would a broken toe, a sprained ankle, a dislocated knee. Below-the-waist injuries of any kind are generally a keep off from the kitchen.

It’s another reason why kitchens don’t have benches or seats, like what you have in your kitchen at home – some wobbly ugly-blue Kenpoly stool for your Help to chill on as she waits for the beef to boil.  A commercial kitchen doesn’t have room for one or need for any. A chair in a kitchen as this is like having an elephant napping on your living room rug. It’s obstructing, misplaced and rather silly.

Chef Les exhales and tells me, “Lunch service is over.”

I unclench my butt cheeks.

An hour before, at 1.12 p.m., me and the photographer on this project – Mburu – burst through the doors to the kitchen like two bulls charging at the matador’s capote. It’s a maroon door, the door that separates the sanity of the restaurant’s dining room from the insanity of the backhouse in the kitchen. A door that reads, ‘Authorised personnel only’. I’d never burst through such a door before. I didn’t know what lay beyond it.

Pause here I ask you a question. You ever crossed the Busia border to Uganda on foot? (OK, not really on foot. You took a Modern Coast bus, disembarked at the border to show your papers to border security then walked.) Or to Rwanda at the Gatuna border? Have you ever stood at the Viewpoint in Naivasha, where a fault line of the Great Rift Valley runs kilometres beneath your feet? Or at points where you’re told the Equator is crossing? Like that spot in Ol Pejeta Conservancy?

You stand there and sort of expect something of a profundity. A moment where there’s a metaphysical shift of some kind. Maybe a tingle in your skin. Or an alignment of your atoms to the spirituality of Mother Earth. Or you start to see the horizon in the fifth dimensions of technicolour. Like some sort of nirvana, as you hear the heavens crack open.

Yet you stand there and nothing happens. The reactions at these imaginary lines are as imaginary as your imagination let’s you. What really lets you know you’re standing at these geographical wonders is a faded droopy weather-beaten signboard saying, ‘You are here. Welcome.’

It isn’t like this when we cross the door into the backhouse to the kitchen.

There was a definite shift: it’s hotter in the kitchen, in the literal and physical sense. I’ve been using this moisturiser for my face from Garnier skincare (damn you, influencer marketing). It’s a 48-hour day cream to hydrate and nourish your skin. Pretty good, actually. We get into the kitchen and I feel my brow plump with moisture. On Mburu’s nose as well (the photographer) I see little droplets collect on the tip of his nose. Chef Les is as dry on his face as he’s unmoved to the heat from the pressure – he’s in his element here.

The kitchen is also much noisier.

Beneath all the competing clangs and bangs and barking orders, is the hum of appliances. Refrigerators, ovens, microwaves, grills, gridle. Water spraying at the sink, knifes on chopping boards, spoons and forks clinking, ceramic bowls, dinner plates and side plates stacked on the dish rack for dispatch to the show kitchen counter. The soundtrack to this racket is someone’s phone – must be Vincent, the senior sous chef, boisterous chap who got jokes at his fingertips. The phone is sitting in a plastic water tumbler, playing some R&B.

The chefs are in their white uniforms, black Crocs on their feet, their heads covered in Ankara do-rags with matching aprons. They seem… what’s the word here? … patriotic.

Then there is the unmistakeable whiff of flavours. And fire, God there is a lot of fire. Fire has a sound, I hear it in Nyama Mama’s kitchen. The sound of fire is the colour of these flavours.

At 1.15 p.m., just as lunch service is kicking off, Mburu and I stand by these swinging door of the frenzy. Chef Les says in short fiery breaths, “Let me quickly brief you guys about how the kitchen works. So there’s me, the executive chef, my work is to make sure the food is of good quality and consistent, to house standards. I must taste all the food before it leaves the kitchen. I also expedite service, make sure everything is done with speed.

“Here –” Chef Les flings at us white protective head gear – “put these on. I have my two sous chefs, Kevin and Vincent. Kevin is out at the show kitchen on the grills and finishing, glazing, garnishing. That’s Vincent there.” Vincent smiles, he can’t hear us over the clang. Chef Les continues, “Then there’s the section heads, the chef de patier, also called the sauciers, today that’s Susan and Abel. Then we have the commes chef, for basic prepping. They come in early in the morning to prep the meats, veg….”

“How do you know how much to prep every morning?” I say.

“We know our projections for the day. So we know lunch on a day like today, Tuesday, not a busy day, we have 40 covers. Dinner is double.”

I nod. Chef Les nods back and raises his eyebrows, a signal to dive into eye of the storm.

And off we go, into what feels like a war zone. Normandy beach. UoN grounds on graduation day. Marikiti market at 5 a.m. Church at New Year’s kesha. High school admin office during form one registration. Uhuru Park at a Cord rally. Toddlers in a small trampoline.

Chef Les collects the orders from the show kitchen counter and pins them to the back, barks the orders for Chef Susan and Abel to roughly whip up at their ever-hot stations, then they pass the hot pans to Sous Chef Kevin at the show kitchen for finishing. Lastly, Chef Les plates the food with a razor-sharp precision, delicate mechanics, as if his hands have adopted a slow motion and the food on the plate will break apart if he doesn’t handle it so.

Everyone gets called by their first name, only Chef Les has the title of ‘Chef’. “Abel! Hizo pork chops zi come!”

And on and on it goes for the hour and a half of lunch service.

Cheese slices are layered between burger breads. French fries and plantains dipped into the boiling oil in the frier. Marinated chicken breasts meet the hell-hot grill in a sizzle. Ugali is flattened and layered with toppings to make ugali pizza. Crispy fried onion rings are tossed in the gridle. Kuku wa kupaka is heated up with a coconut sauce that has an almost sinful profile of flavours. Vegetables lick the flames in a stir-fry. Sour cream is splattered into the pan to whip up the mash. Lettuce and tomatoes of the organic salad are drizzled with olive oil dressing.

In between prepping these dishes, there’s little room for broken telephone, hurt feelings, incomplete suggestions or pussyfooting on what will end up on a diner’s plate.

You say what you want, say it quickly, say it loudly and say it as it is. One misstep means the entire team fails together as chefs. A lone victory is unheard of in the kitchen – it’s ‘us’ and ‘we’, never ‘you’, never ‘me I’.

I must point something out. It’s a non-issue but I’ll say it anyway. There was only one female chef in the kitchen. Out of the more-than 10 chefs in the entire staff, only one was female on that shift. Out in the dining room is where the staff are primarily female; the hostess and waiting staff.

Later, we’re having staff lunch, I ask Chef Les about it. It was out of curiosity really, he said, “The kitchen is a tough place for a woman. The working hours are long, the pressure is high, it’s busy most of the time. I respect the women who work in the kitchen. And those who make it to become executive chefs are really good. When I was starting out, I was mentored by a really talented female chef.”

The storm of lunch service begins to ebb away a few minutes to 2. Chef Les says, pointing to the tables in the dining room, “Most of the tables have food.”

I add uselessly, “Even the orders coming in are fewer.”

I’ve shared some lousy pics on my IG from yesterday’s little adventure. Sneak a peek and follow us if you haven’t already.

Chef Les’s story goes up tomorrow, Inshallah. His is the first story in this miniseries titled ‘Kitchen Confidential’, about Kenyan chefs in Kenyan kitchens.

17
PREVIOUSColours of rhythm
NEXTChef Les: “Food is better than an orgasm”