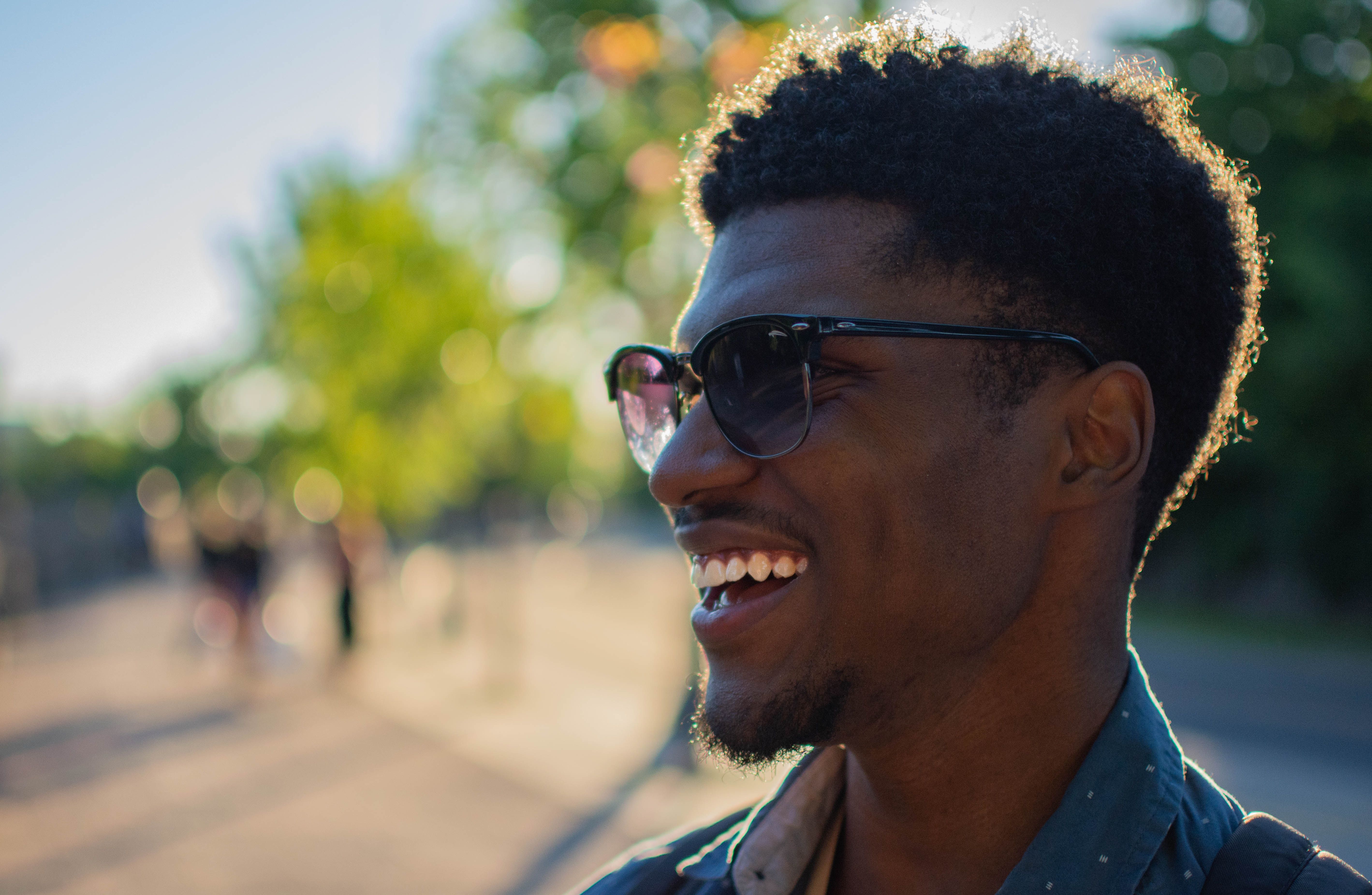 Sitting across from Ian Arunga at Lava Latte, listening, I picture him as a juggler manipulating several balls in the air.

The first ball he threw into the air was in 2009, when he launched his blog, Dear Doris. His posts must have washed up on your social media timeline. They did on mine. ‘Dear Doris – Letters to a plus-size woman’. ‘Dear Doris’ gained a lot of traction. He’d share stories twice a week. Unedited – and uncensored – stories. Those were the days when a story would get five, eight million views, he says. He made money from ‘Dear Doris’. Still does.

September 2016, after years of trying to figure out how to execute it, Ian threw another ball into the air. Dapper Monkey, ‘the one-stop shop for the dapper man’. The statement kitengee bowties Ian was known for informed the brand’s tastes for a niche and bespoke market. Dapper Monkey is what caught my eye.

Ian was already the master juggler. At 31. He wasn’t done just yet.

Last September, he threw in another ball – him and his pals opened shop at Lava Latte. Lava Latte is a coffee house and a cool place to hang out, he says. It’s on 205 State House Road, the old location for Hill Crest Schools. I meet him here on a chilly Thursday October evening.

I can’t imagine what ball Ian will juggle next. Because he’s still hungry to. He tells me he’s hungry because he lives in this town. And because he works hard. And with his hands. And he’s SDA. And the Bible verse which speaks to him most is Psalms 90:17, which says, May the work of your hands prosper.

This is Ian’s story.

I knew I always wanted to go into fashion. My Mum had a fashion business. It was a big business. She had many fundis. Her sewing machine wasn’t in the living room, no, it was…somewhere else. She made most of our clothes. When other kids were wearing ‘hakuna matata’ t-shirts, we were wearing kitengee tops and kitengee shorts. I liked it. It taught me to be different. And to be yourself, not to copy others.

My Mum died in 1996, then my Dad in ‘97. Me and my sister, Becky, we’re not orphans because there were many people around us we call our parents. We went to live with my step-mum. Well, my Mum. We were many siblings. I was the last one to leave her house. I’ve set a reminder on my phone to call her every day at 3. We speak to each other in English but we switch to jang’ when the stories become too hot. Today she was telling me about the house she’s building. It’s only the ceiling left. She went into business in her old age, she has houses for rent. She was a secretary in her younger days.

I was born with my umbilical cord wrapped tight around these two fingers and around my leg [middle and ring finger on the right hand, and left leg]. That’s how I knew as a kid which was the left side and which was right. These two fingers – see how your fingers bend at three points when you fold them, like this? – mine bend at four.

Death doesn’t faze me anymore. I went for so many burials when I reached the age for going for burials. That’s where I developed a backbone for grief. And after my parents died, there was no other death after which could faze me. Except for my aunt, the one I lived with when I came to Nairobi. She was my Mum. She died two years ago. Cancer. That one was rough. Really rough.

I’m emotional and very shy. Many people don’t know this about me. I mask it by talking a lot and telling many stories. I cry a lot. I cry when I watch some movies and read some books. Like ‘John Q.’, the Denzel movie. There’s also this Indian movie called ‘Kites’, it’s about an Indian couple who commits suicide. Then there’s Khaled Hosseini’s [novel] ‘The Kite Runner’ and ‘The Curious Incident of the Dog in the Night-Time’ by Mark Haddon. I still cry when I read them.

I like books that focus on young boys growing up. I feel that I missed out on my childhood because of all these grownup things which were happening around me. Death mostly. And we had to keep moving houses so I gave so much to settling in before we’d get moving again. Kids need a home to grow up in.

Dapper Monkey is inspired by men’s English fashion. I like their fit and fabrics and quality. I was in Wales [UK] when I walked into a shop and was pointed to the section that had suits in my size. Size 45s. That had never happened before. I can’t even walk into a shop in Nairobi and get the right shirt size, I usually take mine to a fundi to slim them. Most of Dapper Monkey’s stuff is imported from the UK and US. Our leather products are locally sourced. Someday I want everything to be 100 per cent made-in-Kenya.

Lava Latte is a place where you’d come and want to put it on Instagram. No one does that with Java. There’s a coffee shop in Senegal called Tee Bagh, I think, two of my co-owners got the idea for Lava Latte from there.

I came to live in Nairobi in 2006. I’d lived in Kisumu all my life, I know I was born in an estate called Kiyabe. I’d passed through Nairobi before, on my way to Mombasa for school festivals. I knew it was Nairobi. 2006, I was coming for a funeral. Funeral for my uncle, he was the husband to my mum’s big sis. My favourite uncle. Everything I owned in this world I’d packed into the suitcase I’d carried. It was a black suitcase with a brown leather strip going around it. It was the suitcase I went with to Form One. I remember my Mum gave me 1,000 bob – 800 was for bus fare and the 200 she told me to get a matatu from Odeon to my aunt’s place in Mountain View. I took the Easy Coach bus from Kisumu. It was supposed to get to Nairobi at 5 p.m. but we got to Afya Centre at 2 a.m. Nobody had told me what Nairobi was like. So at 2 a.m., guys had remained in the bus to sleep ‘til morning, me I put my suitcase on my head and walked across tao looking for a mat.

My entire body is covered in tattoos. From my neck down. On my back, I have four faces – one of my father, my dad, my mother and my sister. On my arms I have … I’m lying. You couldn’t tell I’m lying? I’m a really bad liar. I don’t know how you couldn’t tell. Anyway, I have three tattoos. That’s the truth. Two on my chest and one on my back.

I don’t know what I’ll wear when I get married, I’ve never thought about it. I don’t know what I’ll be buried in either but it better be some expensive shit. I’d like a blue suit. Gold buttons. Not double breasted because double breasted doesn’t go with my body type, I have a small torso. Socks. No shoes. I’ve worn shoes all my life, I don’t want to be buried in shoes. I wear such shoes a lot [brown brogues], they’re shaped to hold the foot.

‘Dear Doris’ was the closest-sounding thing to ‘Dear Diary’. Because the blog started as a diary in 2009. I used to write on this platform called Typepad. I thought it was private because I had a login and a password. I’d write there every day. I’d just open and type. Very personal things, things from my head, like what would go into your diary. Very personal, woi. So one day a lady from Poland who works for Google called and asked if I’d like to put ads on my blog because it had a lot of traffic. I told her she had the wrong number. But she told me to check the stats on my dashboard. I didn’t even know I had a dashboard. I was getting about 2,000 views a day. I shut the blog down immediately. I’m surprised it’s still showing up when I Google it. But I realized then that people like to read real and personal experiences.

It’s a coincidence that the women in my life now look like Doris. Like my girlfriend, Cheryl, does.

I can’t read a book unless it has pictures in it. I really struggled reading as a child. That’s why I became an illustrator. That’s why I wrote a children’s series of activity books called ‘Can You See Me?’. They’re four books in the series. I published them with Storymoja. I make royalties every year. I don’t know how much exactly but I know it makes me very happy.

I’m not happy in this moment because I want something to eat. But I was happy when I was driving here [to Lava Latte]. I was listening to a podcast on BBC Radio. I always listen to BBC Radio. I like their presenters and their voices, in the mornings they have science talks. The podcast was about voice commands that can start and stop things, like a car. I stayed in the car five minutes longer waiting for the podcast to end. I wasn’t happy at lunch time because the food lady brought chapati and beans instead of chapati and beef. I had expectations.

I didn’t wear a watch today because we had a client meeting all day. I have a habit of checking the time when I’m in the middle of a meeting or presentation. It’s subliminal. People think it’s rude.

I’ve worked in Sabina Joy [brothel]. My second job after college was a beer salesman for EABL. Senator, Tusker… such beers. I went to KIM for a diploma in business. I’d talk to the hookers at Sabina Joy as I sold my beers. It was funny – sometimes I’d be talking to one, she’d get a client then come back to finish talking to me. Hookers are very hardworking people.

I’m reading ‘Shoe Dog’, it’s a memoir by the creator of Nike. He says, “You can make anything out of what you have.”