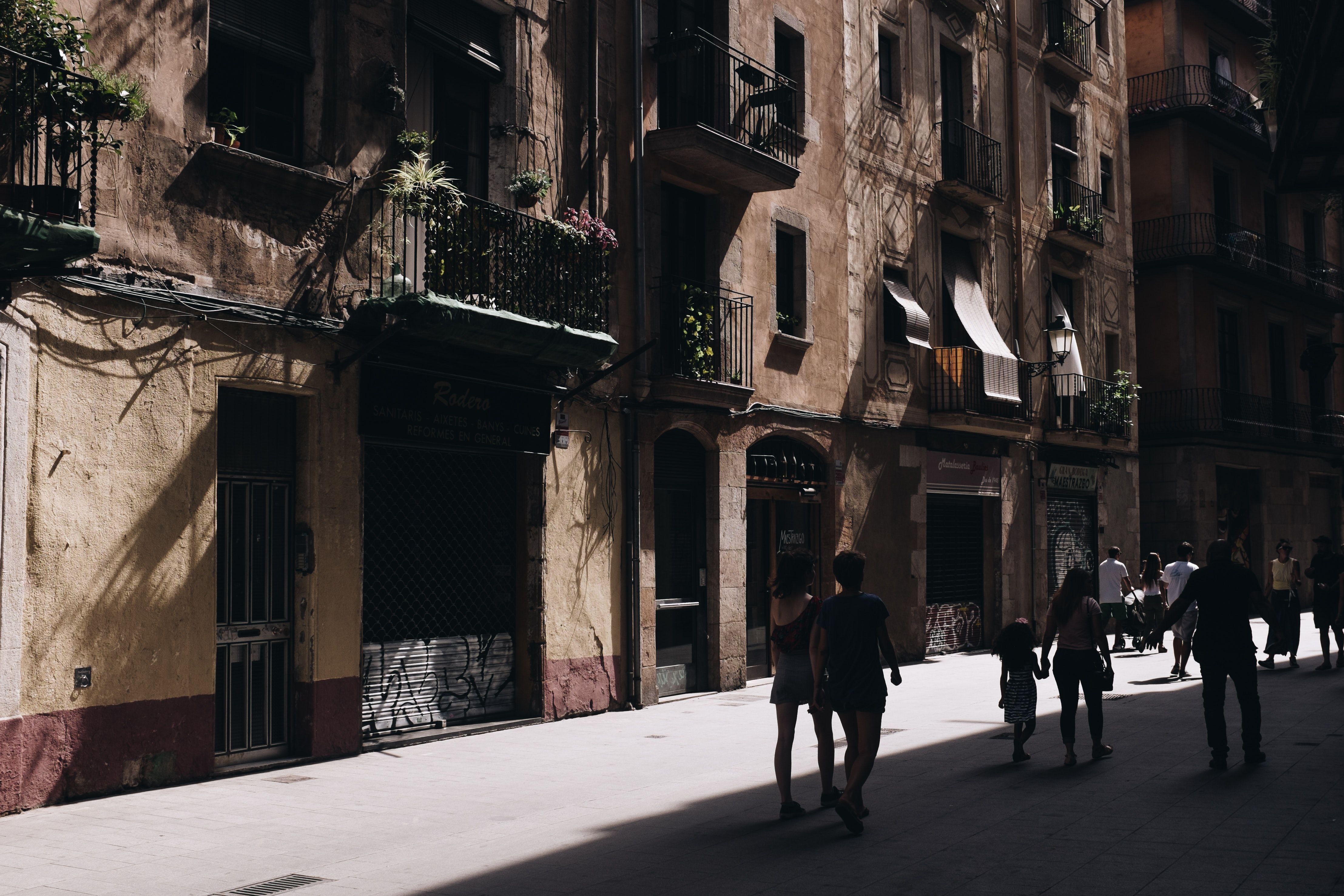 I’ve been toying with the idea of learning Spanish. I don’t say it out loud though, I don’t want my ancestors getting hot under the collar over such drivel.

I should be ashamed of myself because I don’t know Kikuyu (I got my Mum to write me that Kikuyu line you just read). I’m not planted to my roots – my ancestors think I’m an abomination, my lecturers call me ‘a colonized mind’.

What business do I have learning a foreign language when I can’t speak my own?

I knew I had the hots for Spain since I started watching football. Or maybe it was when I watched Spanglish? I don’t know. I’m one of the rare chaps who prefer Spanish LaLiga to the English Premier League. I’m a Barca fan. I’m used to free flowing, fast-paced crisscross-passing football. And during the World Cup I always put my money on Spain.

In fact Spain has always been one of my dream destinations, right under Greece and Rome. I even know a few Spanish words, like ‘policia’, and ‘piensa’, meaning to think (I think). Perhaps the only Spanish thing I wouldn’t dig is Sergio Ramos. He has to be the biggest asshole in Spain.

Then there’s ‘Narcos’, the TV series. I’ve watched ‘Narcos’ all of four times. The first time I only wanted to know Pablo’s story, to follow the plot, getting familiar with the demons of a drug lord. The other three times were simply because I found the dialogue so damn sexy. Mexican Spanish is only slightly different from Spain Spanish.

And then I watched ‘LaCasa De Papel’, aka Money Heist. A Spanish flick. It was suggested to me by a friend, about two weeks ago, and I’ve been using every bit of my free time to catch up on an episode. I can’t get enough of this show. It’s filled with intrigue and various attractive female characters. I’m hooked on the sharp edge of its plot. LaCasa twists and turns, leading me down a rollercoaster of drama and sweet Spanish tongue.

The story is this: A man, known as the Professor, comes up with a plan to rob the Royal money mint. He has worked the plan for years. He envisions the biggest heist in European history. So he rounds up a group of thugs to help him: Tokyo (narrator and all around bad girl), Berlin (group leader and pretentious orator), Helsinki and Oslo (Serbian muscle-heads), Moscow and Denver (father and son), Rio (computer whiz), and my absolute favorite, Nairobi (tall, pointy-nosed brunette, on a mission to reunite with her son).

The Professor didn’t want any real names, or personal relationships. But then Tokyo sleeps with Rio. Feelings are involved, opening a can of worms that will knock the first card out of the carefully laid-out stack.

If only the police knew how peaceful the operation was meant to be, then nothing would have gone wrong. But plenty of things go wrong. People get shot. Hostages escape. Chaos reigns. And then here comes the Professor to save the day with his cunning. He takes the policia on a wild goose chase, dancing around them, always two steps ahead. The guy is orchestrating a heist whilst sleeping with the police inspector, for chrissake.

They don’t get any smarter than that, folks.

I’m up to season two. I stop after every episode to walk around the house, taking time to digest what I just watched, thinking: Man, the Professor really thought of everything. And how about that Nairobi chic? She’s a bloody goddess.

The trouble with my copy of season two is that the subtitles are a bit wonky. It’s like the guy running the subs didn’t have a good handle on the Spanish language. So that instead of saying, “Take her out of the room” it says, “Take it out of the room.”

Am I the only one with this problem?

Sometimes ‘LaCasa’ feels like a soap opera. Other times it feels like it’s about to be a goddamn bloodbath. I really can’t tell what will happen next. The police are hot on the Professor’s tail, and it’ll be interesting to see how he gets himself out. I also don’t know the characters’ facial expressions very well. My eyes are trained on the subs half the time. It’s like an audio-book with pictures.

By the time I was done with the season one, I’d decided Spain should occupy the top spot in my destination bucket list. Forget Rome and Greece. Llévame a España. Take me to Spain.

This semester I’m doing a unit called RET 321: Theology in the African Context. I have class on Tuesdays and Thursdays. For the term paper we were divided into groups of four, each group to write about a particular African concept. My group got Polygamy.

The deadline was to be last Thursday, but the lec – God bless her soul – pushed the due date to Tuesday (tomorrow). Naturally I fancied writing the paper on that Wednesday, one day to the deadline, but the lec’s announcement cleared up my schedule considerably. I now have time to get on with LaCasa.

I watch two episodes over lunchtime. The last thing I see is Nairobi hitting Berlin over the head with an M-16 rifle. Then she picks up the phone and says, “Hello, Professor. Berlin isn’t feeling too well. I’m in charge now.”

The camera goes to a bewildered-looking Professor. Then back to Nairobi. And she says, “The matriarchy begins.”

My jaw drops. The angels sing. Feminist Twitter would clink their glasses at such a scene. And I’m happy too, because Nairobi looks like the only robber with a level head. Of course it’s too soon to say, but everything seems to be alright with Nairobi.

After that episode I sit back and stare at the ceiling, wondering if I’ll ever set foot in Spain. It’s 3 p.m., and my RET exercise book is lying open on the floor. From my room I usually see little sparrows leaping along the fence.

Today there are no sparrows. The sun has turned up its dials. The compound is quiet, save for a bell ringing in the distance – hung about the neck of a cow, trampling over the vast weather-beaten Kajiado soil.

It’s a peaceful moment. But what I really want is to be in Spain. So what I do, I jump onto Google and look up Spain. It’s stunning.

There are stone castles and snowcapped mountains. My eye widen at the sight of Valencia’s medieval structures. I gawk at Catalonia’s grape and olive fields, against the backdrop of deep blue skies. I imagine walking along the winding streets of Madrid, and getting lost in its bookshops, and touring its museums, and then slipping into my swimming trunks, and dipping into a pool full of some Spanish vixens.

I come upon a picture of half-naked men sitting by a stream. The caption says, “Residents of Camarinal cooling down by a river.”

Spain hasn’t seen temperatures like these since the late 70s. Forest fires are becoming the new normal. The needle is predicted to go up to 45 degrees Celsius, and so far three people have died from heatstroke. The weathermen say all this is caused by ‘a plume of dry, hot air coming from Africa’.

Hehe, who would have thought? Mother Earth is playing the old tit for tat. The Europeans are about to pay a hefty fine for colonizing our Africans.

Anyway, to contain the fires Spanish authorities have sent out water dropping planes. They have deployed nine helicopters, 115 fire fighters, and military troops. The task at hand is only made difficult by winds moving at 55km/h, spreading the inferno over 25,000 acres of land.

This isn’t the best situation for what should be Spain’s peak holiday season, especially after taxi drivers in Madrid and Barcelona went on strike, protesting against Uber and other similar companies.

Now I’m wondering whether I really want to go to Spain. How do tourists move around? Do they walk to the hotel from the airport? Ama they take a mat? I can’t imagine walking around in that heat.

I reckon it’s much better to remain in Nairobi, where the sun doesn’t kill you and the girls don’t have long and difficult names like Monica Gatambidze, and where, at least, I’m closer to my roots.
—-
Follow Mike on Instagram: mikemuthaka