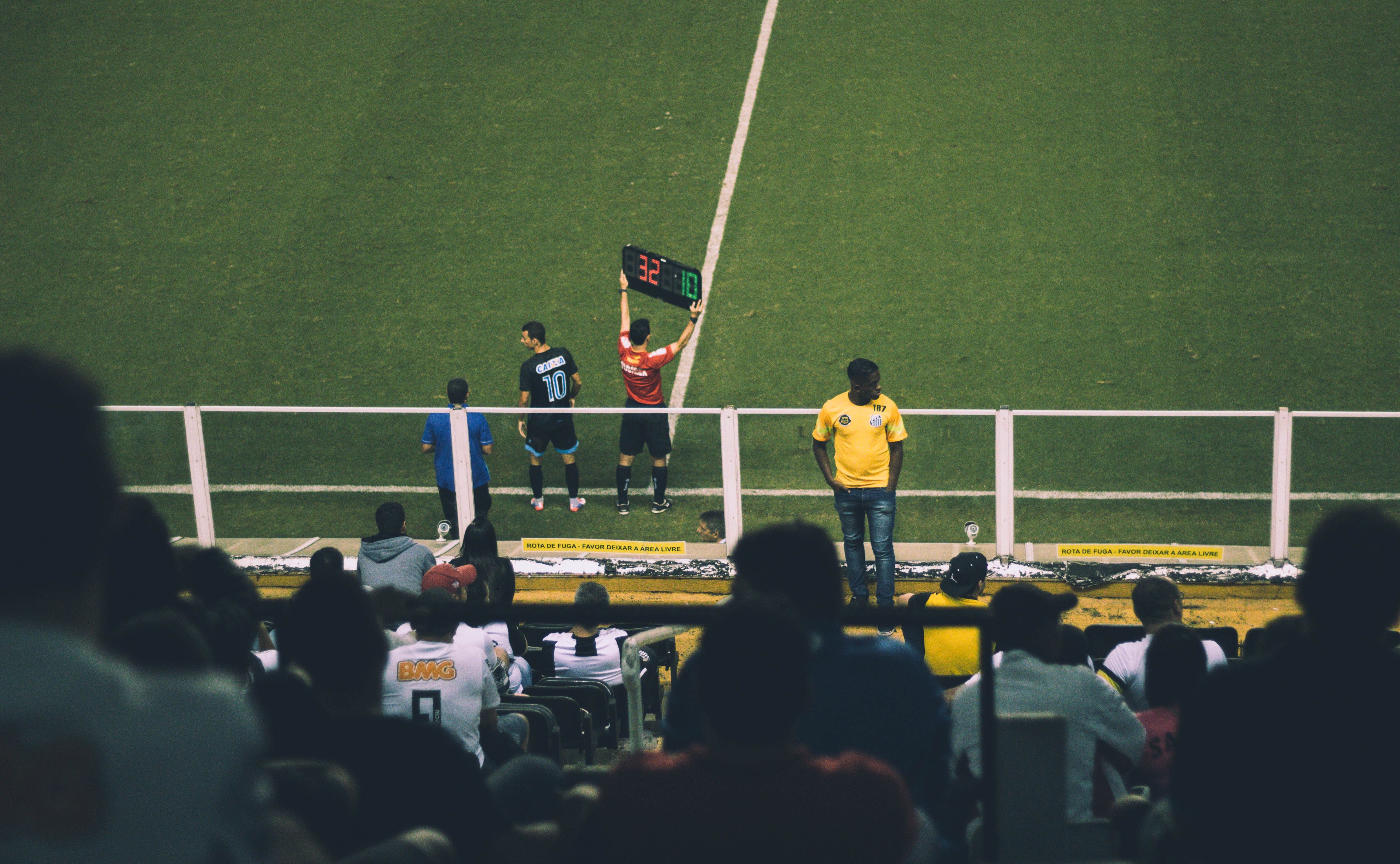 I usually watch the World Cup matches with my Old Man. Sometimes he leaves office early so he can catch the 5 p.m. matches. For the night games we brew coffee and we cheer every goal, and we cringe at every miss, and we breathe a sigh of relief when we hear the poetic sounds of Peter Drury pouring out the commentator box.

There’s a lady who hosts the analysis show on SuperSport. Old Man doesn’t like her too much. I don’t know why. I think it’s hot when a chick talks soccer.

Anyway, during game play we chip in our own analyses.

Saturday before last, I missed to catch the quarterfinal match between Croatia and Russia with him because I was at a graduation party. It seems everyone is graduating this month. Every few days you get a forwarded message saying: I’ll be graduating this weekend. I’d love if you came to the party. 4pm till late. See you there.

It’s hard not to attend, really, especially if the graduate is your best friend’s sister.

Throughout the party I kept colliding with a rush of solemn emotion. I terribly missed the Old Man, I felt bad for leaving him to watch the game alone. I imagined he was all slack-faced and quiet, with no one else to talk to. (Mom can’t stand football). Maybe the coffee just didn’t taste the same. I couldn’t shake off the dark cloud of guilt over my head.

I was at a corner table, under a tent, staring down a bottle of beer. The patron next to me – the graduate’s cousin, I think – was educating me on Bitcoins.

For conversation, and to distract myself from the pangs of remorse, I asked the chap how Bitcoins work. And then I wished I didn’t, because I couldn’t understand any of it. I don’t recall a word he said. But he went on and on and on, and I thought, “Please God make it stop.”

It was the sort of event complete with a DJ and outside catering. Lunch was a buffet of the usual menus you find at such buffets. Including water melon. I didn’t know Novida was still in the market until I got to the end of the queue, where a black-uniformed lady was waiting with a bottle opener.

There were a few speeches after the meal. The Graduate’s folks said how proud they were, and that we were welcome into their home. There was a vote of thanks from the MC, and a final prayer. Then, as dusk fell, there were trays of nyama choma.

The compound was a seething cauldron of uncles and aunts, and little kids running around like startled geese. There was a yellow sign dangling from the tent, with the words ‘Congratulations Grad 2018’.

On my other side of me was my best pal, and every so often a relative would stop by, and say to him, “Na yako ni lini?”

It was funny at first, but then it got annoying, not least because they were interrupting some serious football banter. It was dispiriting for me too, because I also started to wonder, “Yangu ni lini by the way?”

I’ve been in campus three years, but I still can’t picture my disheveled ass in a graduation gown.

By 8 p.m. the tent was divided itself into factions. Men sat with men, and women sat with women. The millenials took up a round table. No gender lines here.

No beer guts, either. No discussions about school fees. No vernacular. No billowing laughs. It was more like soft chuckles, everyone slipping steadily into alcoholic nirvana. There were selfies, cool sneakers, and sneers at the DJ, whose music selection was so dreary that someone wondered out loud about the skills of said DJ.

But soon, the graduate – having slipped out of her graduation gown into something tight and playful – simply plunked a bottle of vodka on the table, and tongues loosened, and the music picked up the tempo. The DJ was giving it the full Davido.

My gaze fell on the girl seated across from me. She had arrived when I was on my third beer, accompanied by two guys. One of them was her boyfriend, but I didn’t know this until later, when I asked my pal if she was ripe for the taking.

Her braided hair fell to her shoulders. She had a tight dress, and a leather jacket. She had hips for days, man. She returned my stare, and I saw, or I think I saw, a bloom come over her round cheeks, ending in a fleeting blush.

Suggestive? Could it be that she undressing me with her eyes? I couldn’t tell for certain. But boy did I love it. We kept locking eyes. She held her drink with both hands. And suddenly I was the one doing the undressing. I was unburdening her of the drink, and her boyfriend, and leading her to my bed.

I was getting drunk.

At around 10 p.m. another guest arrived. A boy. Another leather jacket. He’s what you’d call fashionably late. He came when the DJ was playing Wizkid’s Soco. He had a grey god papa hat, and he looked like some sort of benign ecclesiastic.

He said hello to everyone and sat one seat away from me. I turned to him and said I liked his hat.

“Where did you get it? I’ve always wanted a hat like that.” (Hehe, lies)

“Eh? So what took you to Amsterdam?”

“Ah nice. What’s the craziest thing you did over there?”

He spoke dreamily about the hotel rooms and the coffee shops and the weed. I chuckled, as if establishing a mutual understanding of his foreign conquests. I couldn’t share in his enthusiasm, though. My thoughts were split between Old Man back home and the forbidden fruit seated across from me.

She had stopped looking at me, now tapping at her phone. A crowd gathered behind her, they all had their eyes trained on her screen.

Turns out the fruit hooked up a live stream to the World Cup match, which had gone on to penalties. My attraction for the fruit was now threw the roof.

I stood up quickly and went round to take a peek. I saw Rakitic go up to take the kick. If he scored, Russia would be kicked out of the World Cup and Croatia goes into the semis.

The music died out like a spent wind. The world held its breath. My mind went back to Old Man.

I see him on the couch, in socks, holding a mug of coffee. I see him tense up. He’s a Barcelona fan, so Rakitic is a familiar face. I see the commentator going quiet, and I see the silence that whips into the living room.

A loud cheer erupts from the table of old men. The women look on in amazement, before collectively wondering what the excitement is about. At our table the cheer was more subtle, and someone said, “Si nilikuambia, hii kitu ni ya Croatia.”

Then I see Old Man retiring to bed with a smile. And I smile along with him.

But I’m not smiling now. It’s the night of the World Cup final, and France has won. I’m writing this with my snotty hanky on hand.

I feel bad for Croatia. I really do. I cried when I saw the players holding back tears. And I cried even harder when I saw Giroud – a French player who has had no impact on any game whatsoever – French kissing the Cup and shouting into the cameras.

The world is truly unfair, and I’m of the opinion that VAR should be outlawed from here on out. What’s the point if the damn ref doesn’t know a ball-to-hand when he sees it?

There’s a silver lining, though. And his name is Luka Modric. Short-legged, long-haired, and pointy-nosed; Modric stepped onto the pitch and grabbed hearts everywhere. He captained the underdogs. He chased down the ball, and created chances, and put the brakes on England, even though the team was suffering some tired limbs. And in the end, with the rain falling with an open handed velocity, he was awarded the Golden Ball.

The entire world nodded in agreement. And his President even gave him a warm, lingering hug. Doubtless Giroud was a little jealous.

If you read Modric’s story you’ll find that his parents worked in a factory. His grandpa was killed when he was barely six years old, and he was forced to live as a refugee for a while. I can’t imagine how hard that must have been for the lad. And now I hear there’s a court case against him.

I bet the President, while hugging him, said: “I’ll make sure the case is dropped. Okay, son? You’ve made me so proud.”

He’s come a long way, Modric, from playing football in a cramped parking lot to where he is. And I tip off my hat to him.