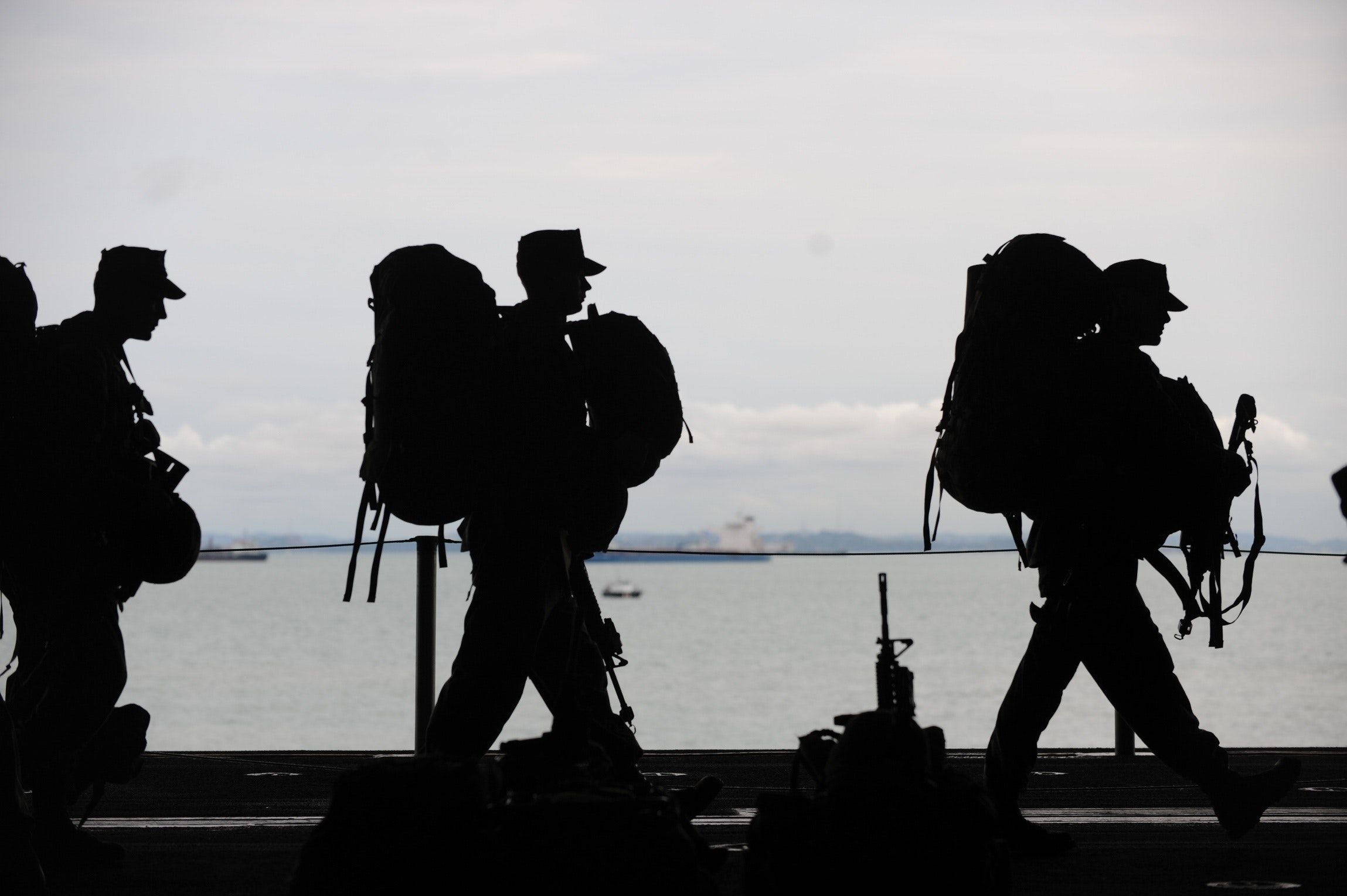 The new addition to my nightstand is a hardback. It’s called The Greatest Generation, by Tom Brokaw. It’s a collection of stories about the American men and women who fought in the war that brought down Hitler. I swear I can hear the American national anthem in every page.

It’s a tribute to the people who came of age during the Great Depression. This was the generation that answered the call to help save the world from fascist maniacs. They quit school and they left their ordinary jobs and got directly into uniform. You might have seen the results in Spielberg’s Saving Private Ryan.

“At a time in their lives when their days and nights should have been filled with innocent adventure, love, and the lessons of the workaday world, they were fighting, often hand to hand, in the most primitive conditions possible, across the bloodied landscape of France, Belgium, Italy, and Austria. They were in the air every day, in skies filled with terror, and they went to sea on hostile waters far removed from the shores of their homeland.”

You can totally hear the anthem, right?

I was particularly drawn to the story of a young soldier called James Dowling. He got drafted into the military at 19, and he promised Dorothy – his hometown sweetheart – that they’d get married when he came back.

But during the war his squadron came under attack by the Germans and James was taken as prisoner.

Shortly before Christmas the prisoners were allowed to send holiday greetings over the radio. It was the first message from James since his capture:

“Dearest Dorothy, I am all right, sweetheart. I didn’t get a scratch or anything. Please tell Mom and Dad. Don’t worry about me. We’ll get married as soon as I get home again. I love you and miss you terribly, sweetheart, and I wish I could be with you soon. I have lots to tell you when I get back.”

Anyway, when I read some these stories I can’t help but think back to high school. It was the only time I was ever away from home, and sometimes it felt like I was also in the military.

We’d only get about five hours sleep. The alarm bell was a rain-coated watchman who knocked two metal bars against one another. Your bald head would absorb the morning cold. You’d check in for morning prep while the stars were still bright in the sky.

You weren’t allowed to take a nap, otherwise that would earn you a few strokes of the cane. Don’t be caught reading a novel under your desk, either, because it would be taken away. Newspapers? Ha, don’t be silly. KCSE is around the corner.

And you better not be seen talking to your desk mate during prep, else the teacher on duty will strike you with his cane, even though you were really doing group work. It felt like the school was being run by the Stasi.

It seemed you were always running towards something. You were required to run to class, or to the dining hall, or to virtually anywhere else. Why would you walk? Don’t you have midterm exams tomorrow? Walking is a waste of time.

Sometimes you were just rushing to finish your lunch, because the Math teacher wanted to squeeze the last ten minutes of lunch break with a pop quiz. And then after that you have Swa and then double Chem.

Those were some perilous times, and I missed home terribly.

I’d often dream about the warmth of my own room. I missed mom’s cooking, and I missed having hair on my head. I missed waking up to daylight. I missed hot showers. I missed my own music playlist, and not that drab they used to play in the entertainment hall. I missed walking. And above all, I missed Facebook Girl.

Number 1 was our mutual pet name, not to imply that there were number 2’s, though. Not on my end at least.

Every morning as I hurried out of bed I would think of her, peacefully asleep a million leagues away. She’d keep me going at a time when life was one huge timetable punctuated by bells. I’d remember the promises we made to each other, that when I’d finally finish school we would settle down. She was going to teach me how to swim, too. And I did pushups every day so I could get into shape.

Towards the start of KCSE a classmate sneaked in a cell phone. It was a tool for exam cheating, really, but I didn’t give a damn about the exam. I was only interested in talking to Facebook Girl. So when I got hold of the phone I sent her a text. I had her number off the top of my bald head.

Hehe, I was the most romantic boy who ever walked in shoe leather. We didn’t chat for long, though. A cell phone was hot goods. The owner had to put it away quickly before a teacher saw it.

The next time I heard from Facebook Girl was through a big ass success card. It came with a letter, addressed to Number 1. I read that letter every day before I went to bed, and on Saturday afternoons, when everyone else was in the entertainment hall.

“Can I ask you a question?”

He lifts his face but doesn’t look at me, almost like he doesn’t want to engage. Almost like he’s thinking, Christ! What the fuck does he want?

He’s just from a lengthy phone call, which he rung off by saying, “No, they should just pay you.” During that conversation I had already decided I liked his black leather jacket. He was tall, and he had a shiny black beard. I decided I wanted his beard too.

He’s having a meat pie and Afia Juice. Apple flavored. And I decide it would be unwise to ask for a piece of his meat pie. I’ve just polished off a packet of Skittles when he sits down. I didn’t know his name was Leonard until the last minute, when he jumped into an SUV and drive off.

It’s a warm Wednesday morning at Bonjour. My class has bounced. I have nothing else to do, and I don’t want to go home this early in the day. Far better, I reckoned to sit outside the convenience store and watch the traffic on Valley Road, and to be a nuisance to unsuspecting strangers in leather jackets.

He turns to me and nods.

He allows himself a brief chuckle. He places his elbows on the table. The bagged meat pie is minus one bite and it sits quietly atop the table. The juice remains uncapped. His gaze has nothing of shiftiness in it, and he strikes me as a friendly guy. “I’m a contractor.”

He answers like he still hasn’t made up his mind whether to trust me or not. I’m wondering whether to leave him be, to let him enjoy his meat pie in peace.

He thinks for a moment then says, “Yeah, it’s okay.”

He looks to be in his early 30s. He’s composed. He speaks with a manly softness and the old untidy gestures of youth have left him.

He says, “My job demands lots of travel. Like now I’m waiting for someone. I’m on my way to Naivasha.”

“That part is fun at least, right? The travelling?”

He exhales. “It gets exhausting. Every month I have to go down to Mombasa. I travel maybe three or four times a week, so I never really have the time to have fun.”

I nod my head. “Where’d you go to school? Campus, that is, where?

“A Uni in Namibia. Did a business course then worked as an intern at a bank in my second year. You know Namibia has a small population. It’s like, two million people. So there’s no competition.”

I’m giving him all my attention now. He’s really getting into it. “It was hard getting a job when I came back to Kenya. The competition was much steeper. Nairobi moved too quickly. As an intern in Namibia I’d get a salary of up to 80k. The same work as a fully fledged employee in Kenya would fetch a measly 30k.

“My academic papers weren’t getting me ahead. So I joined hands with my pal – the one meant to pick me up – and we started a company.”

I forget to ask the name of the company. But from where I sit Leonard looks like a made man. He looks like the proverbial goals. And he looks so damn sexy with that beard.

I ask, “How would you define success?”

“Success is…” he trails off as he strokes his beard, “success is peaceful nights. It’s having time on your hands, to be with your family. People think success is about the money. But it’s not. Look at Trump. He has all the money in the world but the whole world hates him.”

Then Leonard points behind me, to a cream colored SUV that has driven into the station.

“Leonard.” He gives me a firm handshake and starts to walk away.

“Have a nice trip, Leonard!”

I watch as he gets into that SUV. And I wonder whether he had had a girl waiting for him while he was Namibia. I forgot to ask. I wish I did, though.

And instead of saying, “Have a nice trip,” I should have said what I really wanted to say: “Will you finish that meat pie?”
—–
Mike blogs at www.mikemuthaka.com