I had the honour of sitting with Chef Tom for a chat back in March.

And it really was an honour. Because Chef Tom is like an eel – difficult to pin down, a predator of blinking opportunity with the rare ability to squeeze and fit into snug spaces.

(Ha-ha, I feel like I’ve totally forced that correlation. I wanted to simply say ‘he’s as slippery as an eel’. That we couldn’t get him to sit down for a chat, even after I pulled the ‘I’m from Nation’ card, instead of ‘I’m from Craft It’.

Who wants to settle for First-Aid-In-English clichés, though, when we can experiment with the elasticity of the English language?)

Anyway, the first time Mburu and I went down to Kikuyu to meet Chef Tom in early February, he said he’d completely forgotten we were coming down. (Mburu was the photographer on this project).

Chef Tom, in his grating voice, a voice that makes you imagine he swallowed a bowl of gravel for breakfast, said, “Guys, I completely forgot. And my phone doesn’t catch signal in the kitchen sometimes, maybe that’s why you couldn’t reach me.” He glanced at me apologetically. He continued, “Look, I was up all night baking, I don’t have a baker, so I really need to go home and sleep. Can we do this another time? Please? I’ll fix you guys something before you leave. So sorry, man. So sorry.”

What do you say to a man in sweatpants, faded-blue Tomy Takkies and a beanie,  a man who hasn’t caught a wink all night because he was baking all night to music?

You sit your ass down in his Kitchen and marinate in the unusual ambience.

Chef Tom made us a lunch of mbuzi with glazed plums and roast potatoes, I’ve never had anything so delicious in a long time. We wiped our plates clean then hit the road back to the city, the sun behind us.

That was a Wednesday, in February.

Weeks later, on a loose Friday in late March, Mburu and I were back in Kikuyu.

Chef Tom said, “Look, guys, there’s something I’m working on for the garden. I want to have more sitting space, clay ovens for pizza, steak grills… Why don’t you guys come when we open in a few weeks? Hm?”

What do you say to a man in sweatpants, Tomy Takkies and a beanie, who gives you puppy dog eyes?

You look away and negotiate with him. Hard. I said, “Let’s just sit for 30 minutes. OK? Whatever I’d have gotten in those 30 minutes will be enough for the story. Just 30 minutes. C’mon?”

He wiped his hands on his apron and put his phone down on the table.

We ended up chatting for three hours. From 11 to way after lunch service past two. We even read whole paragraphs from his ‘Bible’ – ‘Conversations With God’ – and discussed them at length with Mburu.

What sort of story do you get after chatting a chef in a white t-shirt and beanie for three hours? You get this story.

I have feeling gnawing at my heart that I took more from him than I gave back in return. Maybe I should offered to go in the kitchen and fix something for him? My cold potato salad, that one meal I know can’t fail? Hahaa.

Chef Tom gave me a tight hug after we wrapped up. He hugged me and said, “Keep doing your interviews like this.”

I blushed. Like a silly Kale chick from Kaplong.

Plenty of the principles Chef Tom runs his Kitchen with are also applicable to life.

I’m injecting these principles into my banal routines.

I thrive more on feeling these days, than on method or technique. (Not to say that I’m ignoring method or technique, they just feature lower in my list.) I find myself passing things over because ‘It doesn’t feel right’. Or, ‘I don’t feel it.’ And, ‘I have a feeling I shouldn’t have another slice of cake.’

I’m teaching myself to daydream and imagine more, because Chef Tom said, “You can’t have something if you can’t imagine it.”

I’m experimenting with my creative expression. I thought I had lost a large corner of my soul because I stopped writing in my journal. But some wise bird called Michelle last week told me, “You’ve transformed and evolved, Bett. You got a daughter, you become a wife and got your own home. You’ll be what, 35 in October? The therapy that worked for you in your 20s won’t work in your 30s. So say goodbye to your journal, and explore new ways to express yourself.”

And I have. I am. I got houseplants, for crying out loud. Houseplants! But more on that another day.

GB is studiously reading ‘Conversations With God’, the books that changed Chef Tom’s perspective on life. My young mind has not yet matured enough to comprehend the gravity of what it speaks. One day it will.

And music. God, music. I didn’t realise what a central part of my life music occupied until Chef Tom pointed it out in his and in his Kitchen.

Music is the soundtrack of my life. Others have the sizzling of a pan as their soundtrack. Some others it’s the giggles of their toddlers. Plenty others crave that whirr sound from an ATM as it spews bills.

Right now I’m listening to Scorpions ‘Wind of Change’. Take me to the magic of the moment, where the children of tomorrow dream away, on the wind of change.

Yesterday I had on repeat in the moti Enid Moraa’s ‘Mchungaji’, local gospel. Last week it was Deborah Cox ‘Sentimental’, old school 90s. Week before that was ‘Don’t knock it’, from Bobby Nunn. Motown soul from the 80s. Next week I’ll listen to ‘Tangawizi’, the new-ish album from Ondi.

Then there’s indie. Indie is for always.

What follows are the photos from the day with Chef Tom at Crave Kitchen. I’m aching with nostalgia just looking at them.

Take a trip down there for some lunch or breakfast. Or just to be jolted into an alternative inspiration. 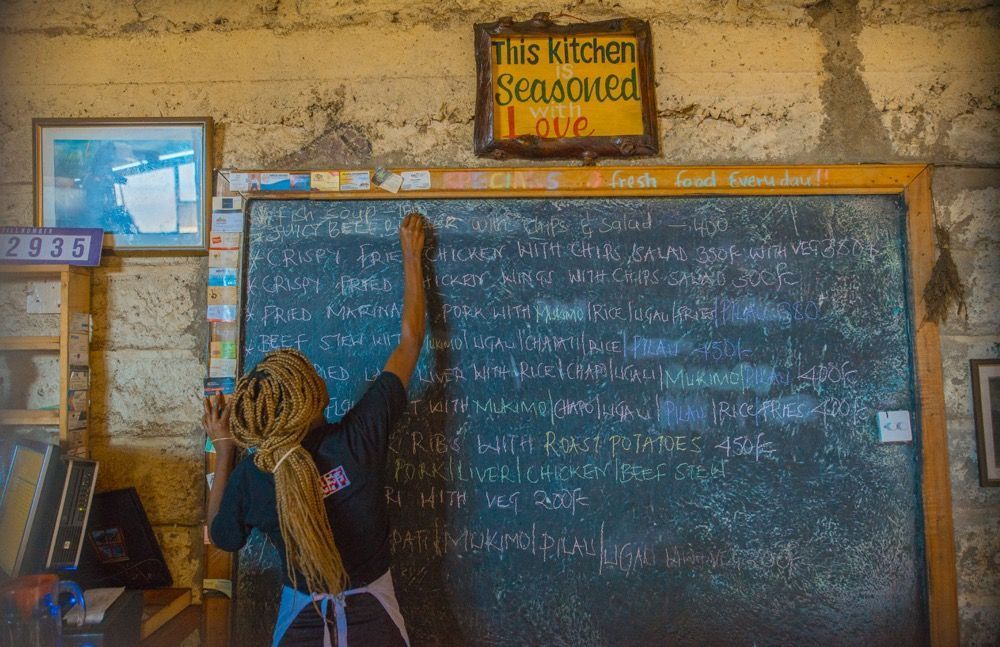 Half the time the chefs are whipping up stuff that’s not on this board. I want to have a board like that in my life. Board and those defiant chefs 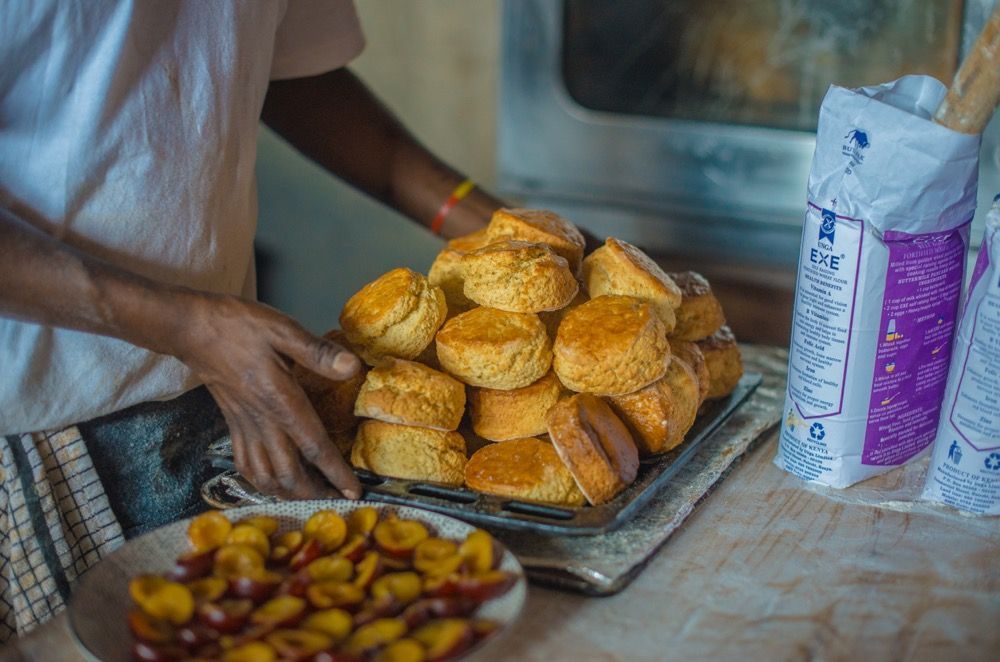 See those deseeded plums in the corner of the photo? Chef Tom later glazed them for our mbuzi. I swear 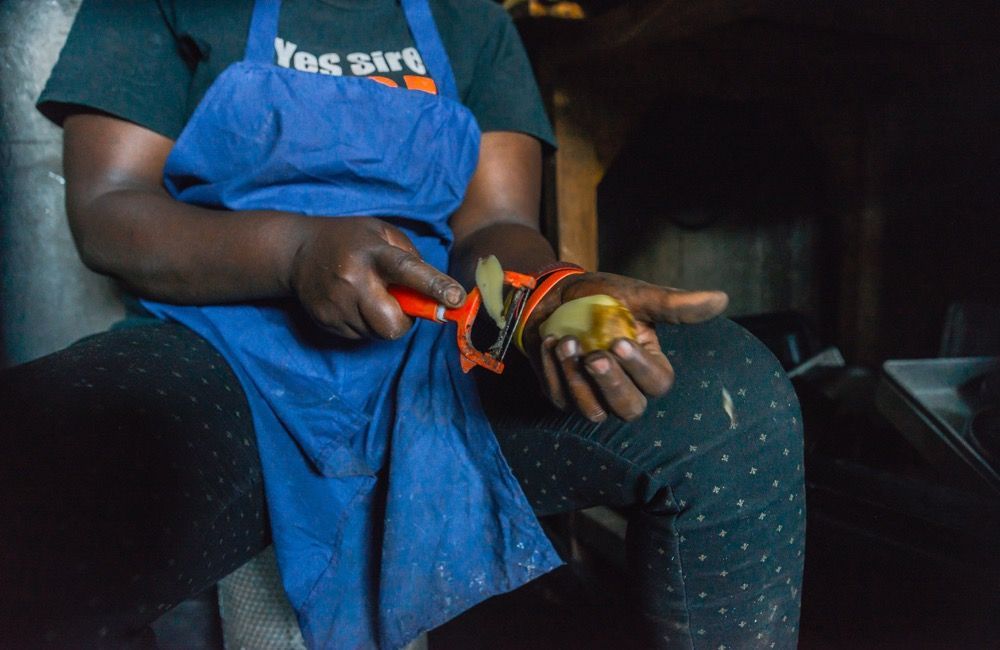 Can you smell the muddy peel from that waru? 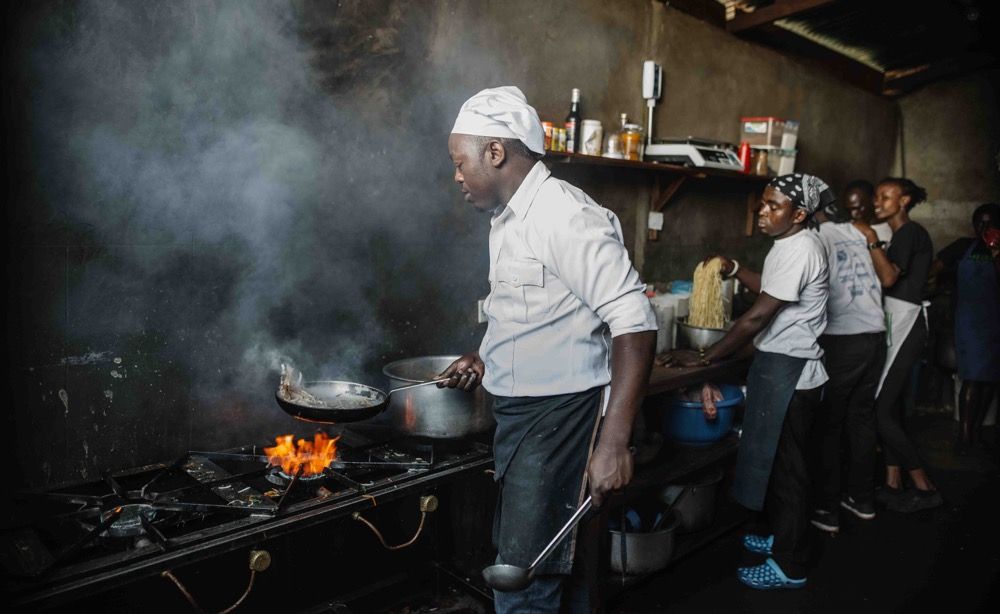 A simple kitchen that makes extraordinary meals. Folk worry too much about appearance 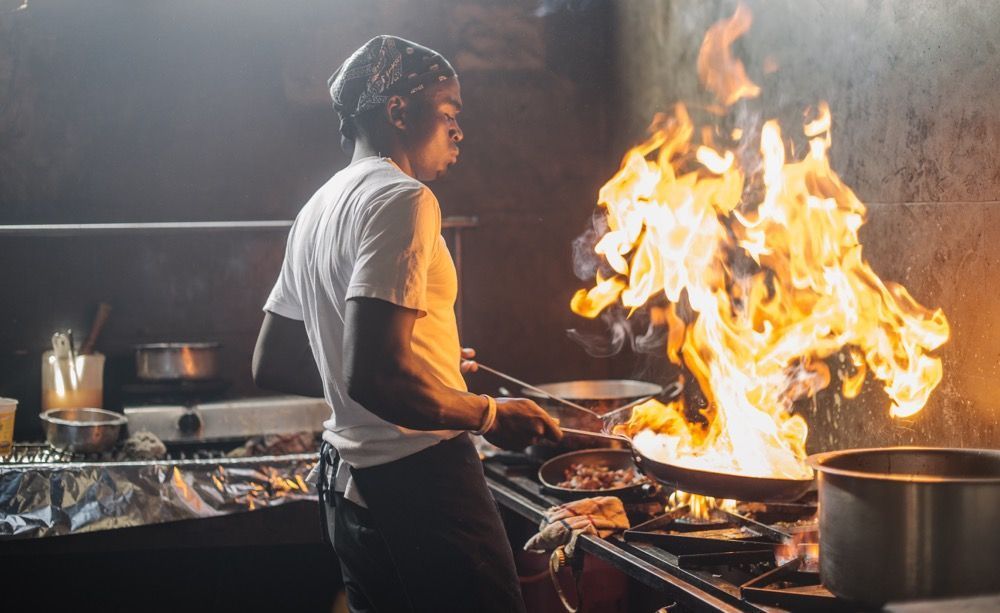 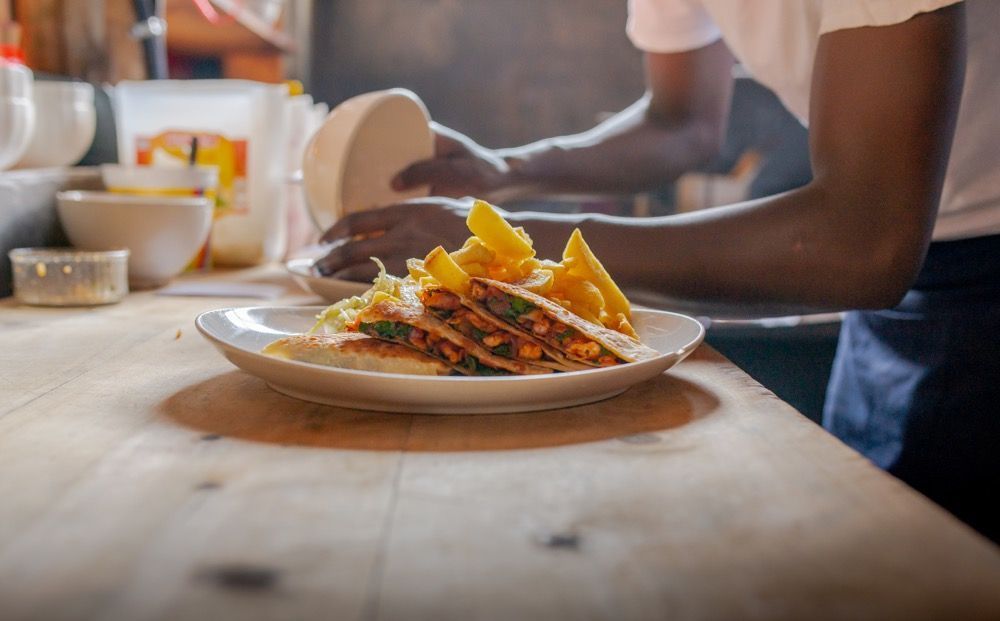 Do you know what I see here? 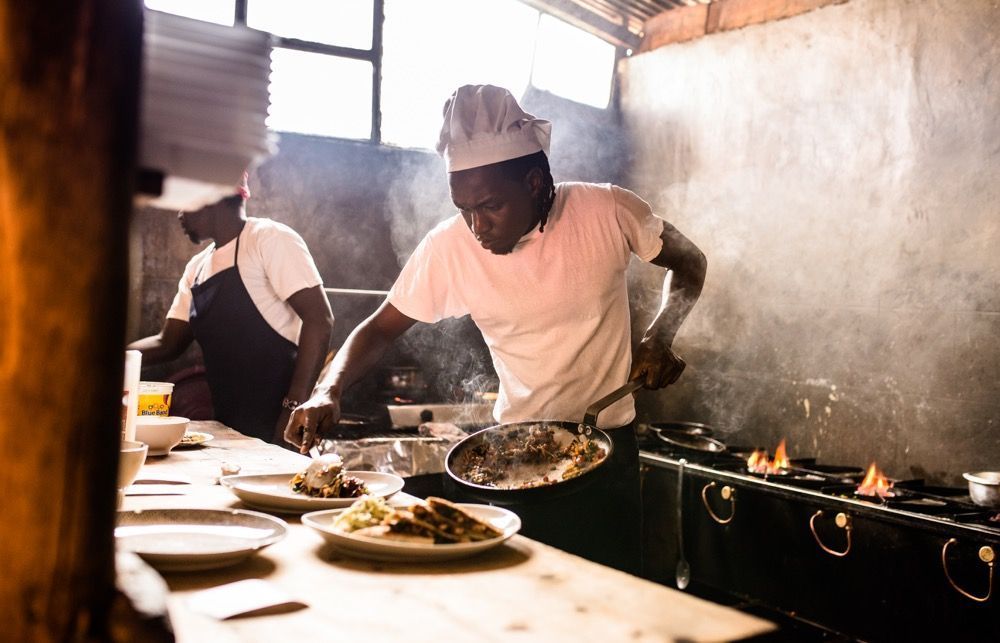 None of the chefs are college-trained. They work in those white tees because Chef Tom said so. Plus, they’re comfortable to work in. Of course.

This bulb haunts my dreams. It has the answers to all your questions, don’t you think so, too? 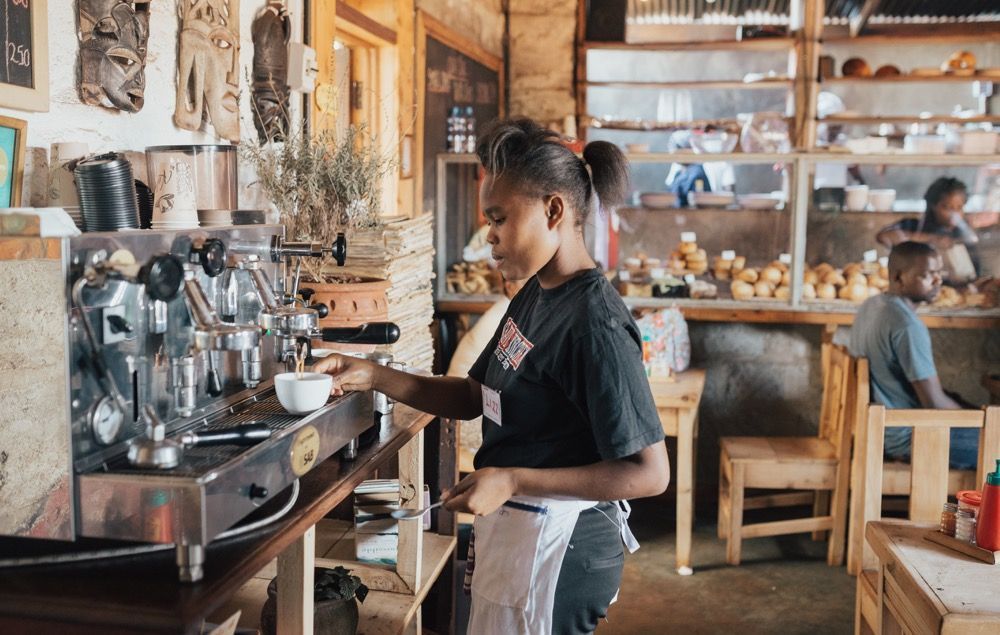 I know you’re wondering but the answer is no – those chairs won’t leave splinters in your ass. They’re quite comfortable, by the way. 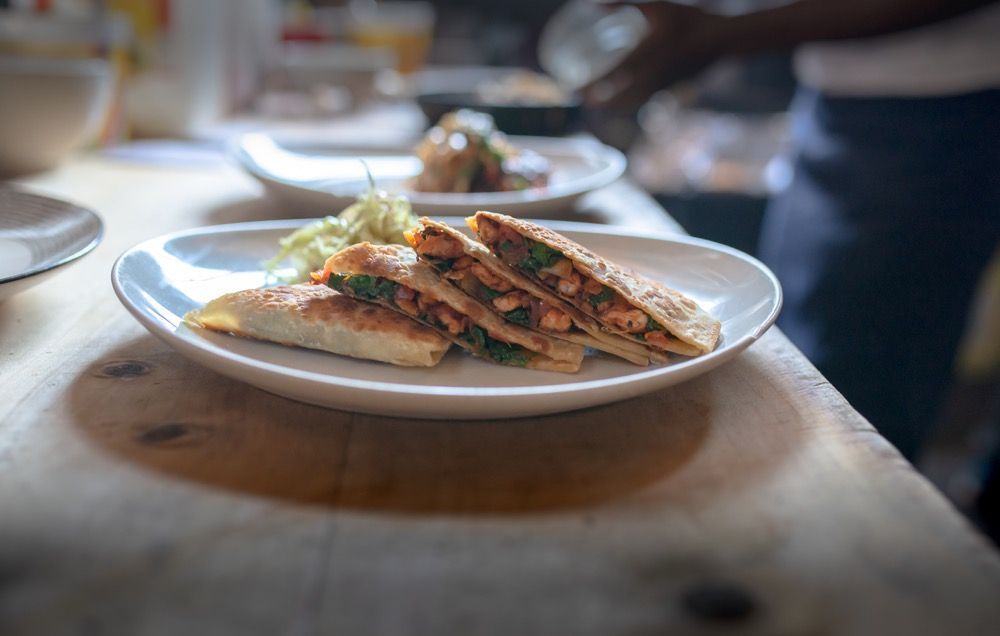 I see chicken wrapped in heady indecisiveness and giddy delirium. It’s a thing you can actually serve on a plate 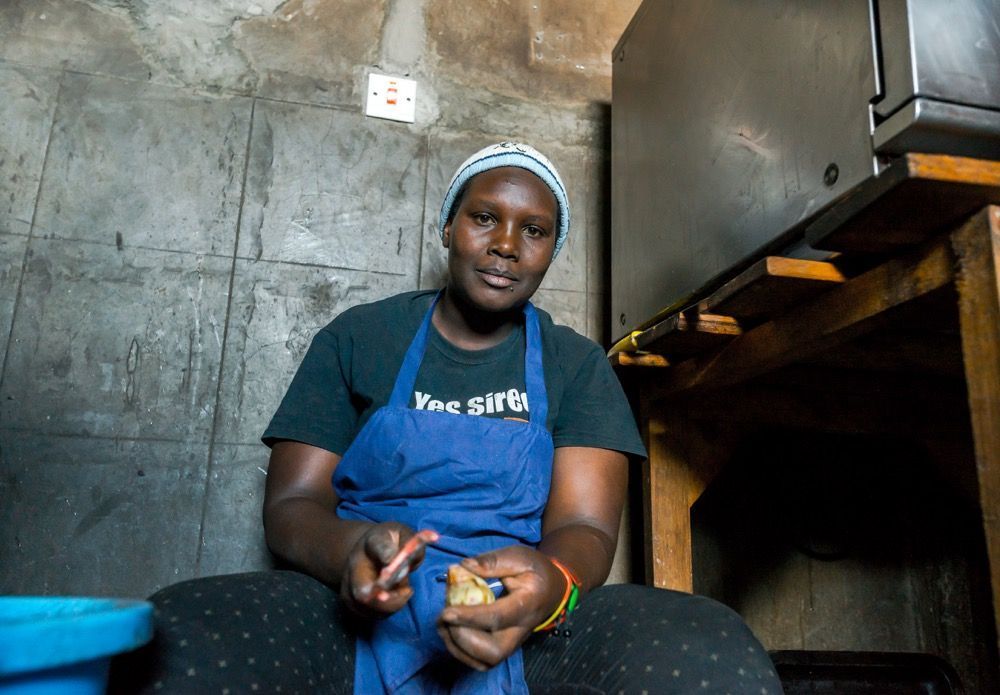 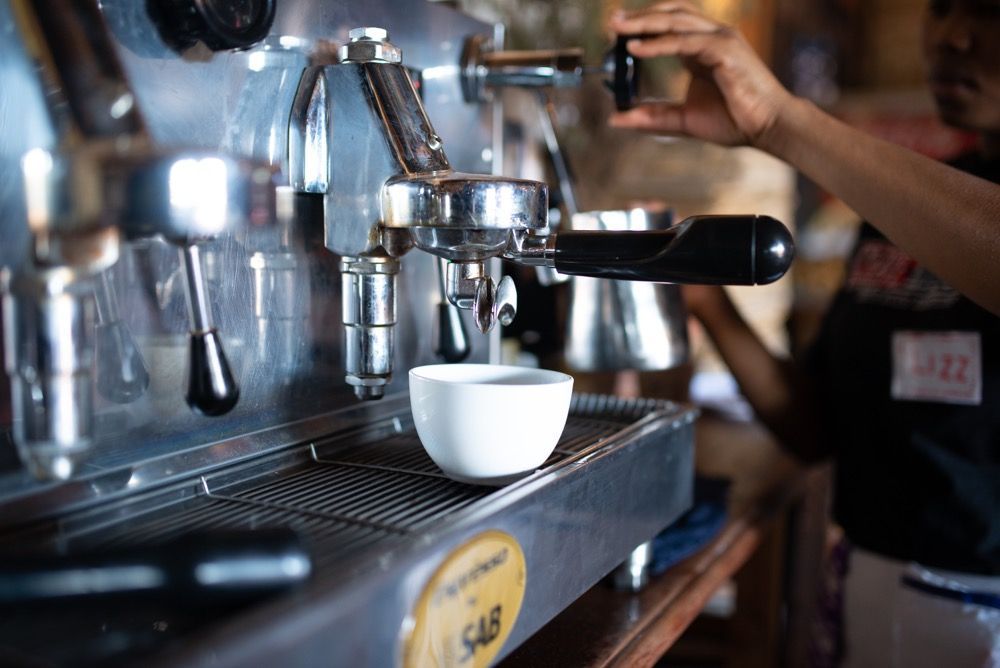 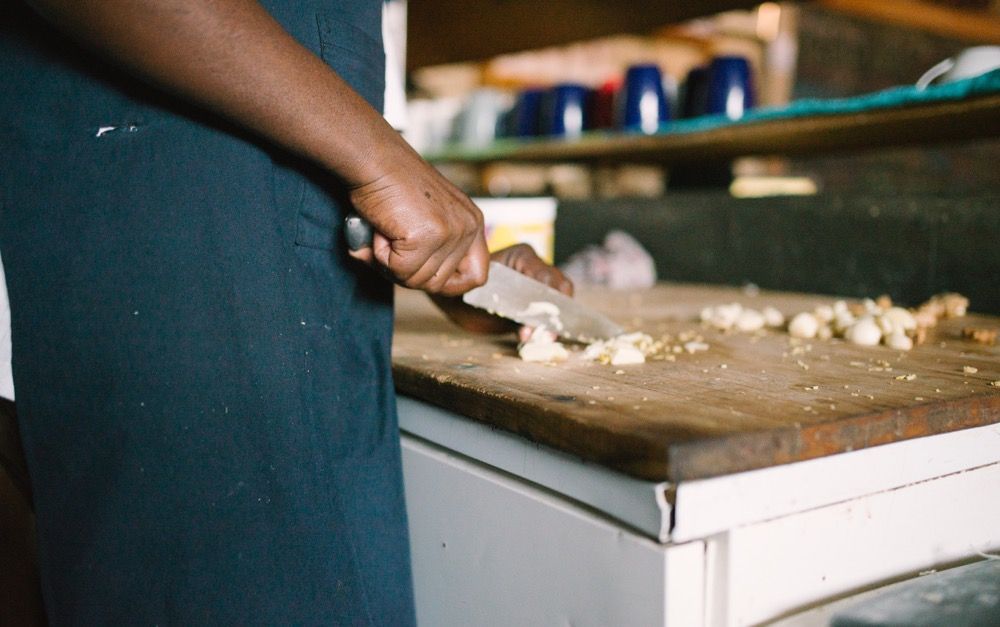 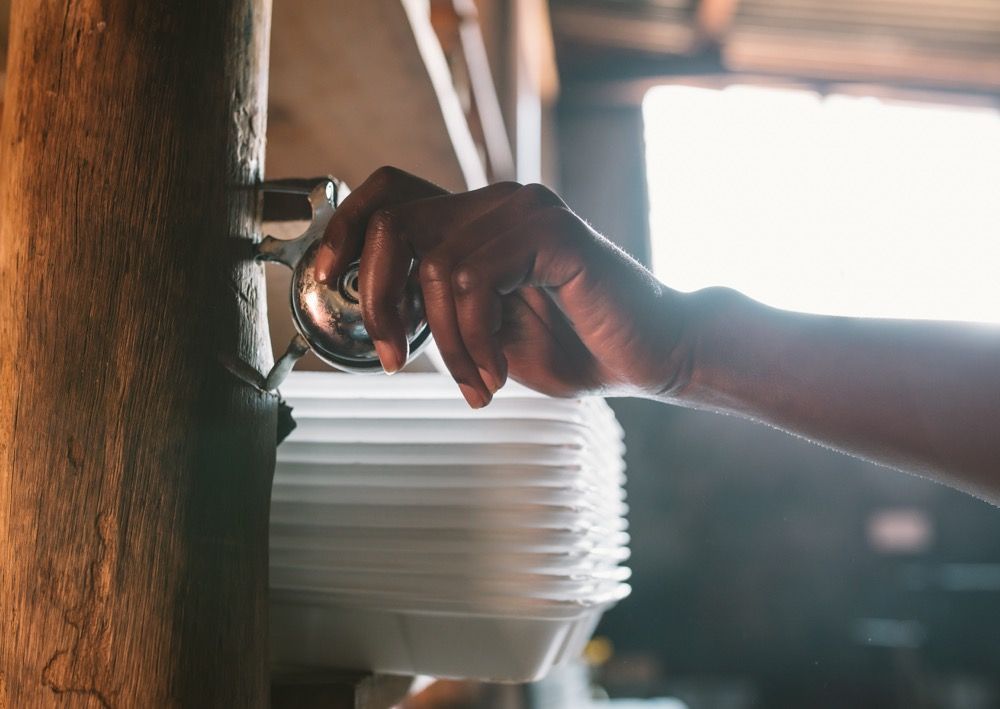 This bell was pulled off the ears of a Black Mamba bike. Only a few chefs have the privilege of making it ring 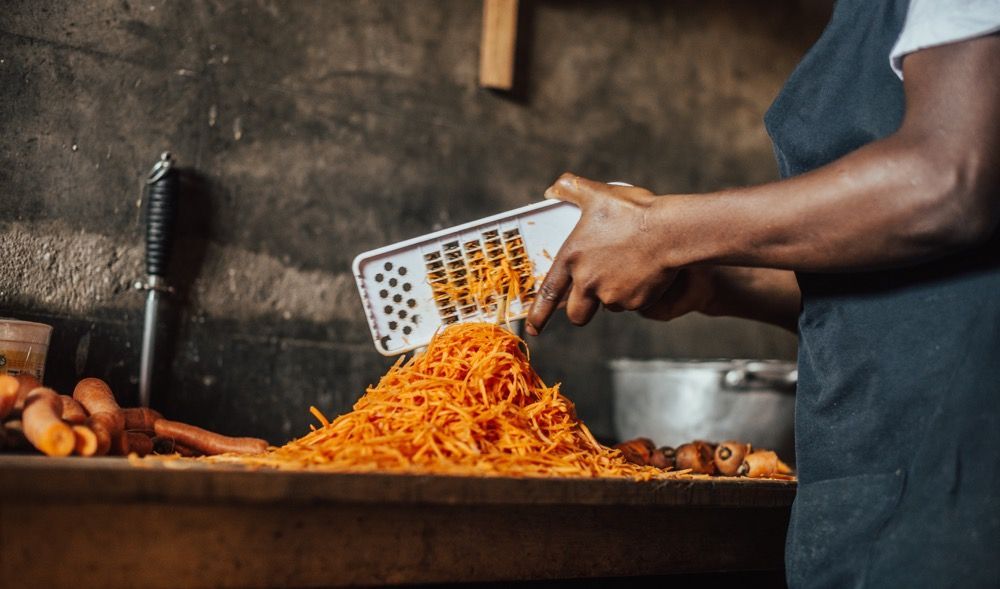 We live and die by the roll of such pins 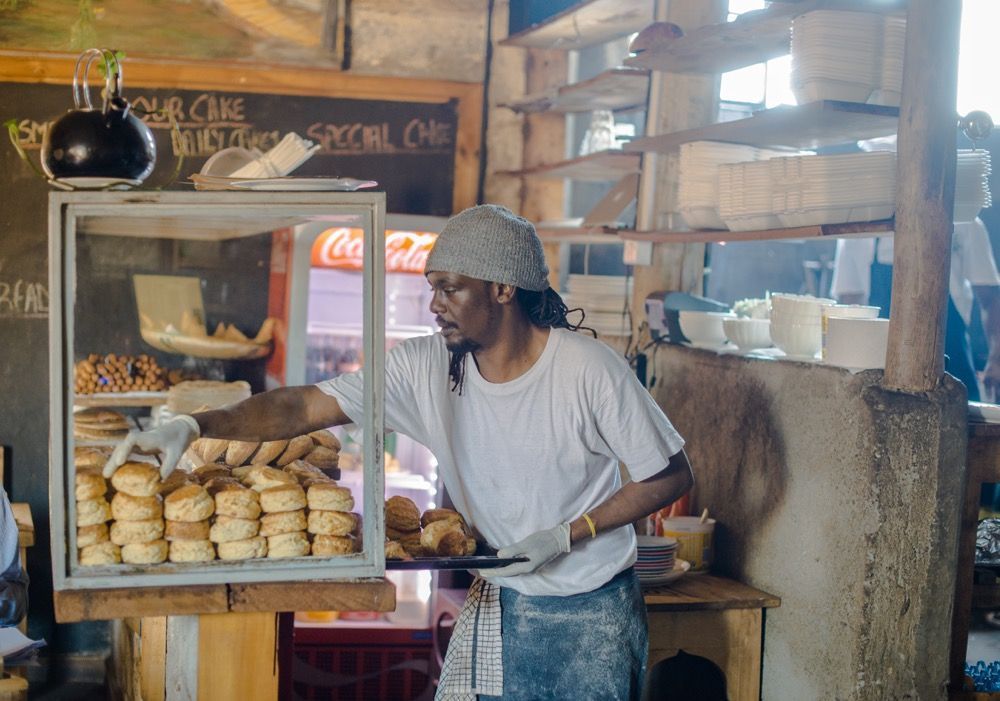 Plum tarts. Or something, I don’t remember their name. What I remember is how delicious they were. Warm and unadulterated, straight from the oven (Oi, do you see the laptop from where the music plays?) 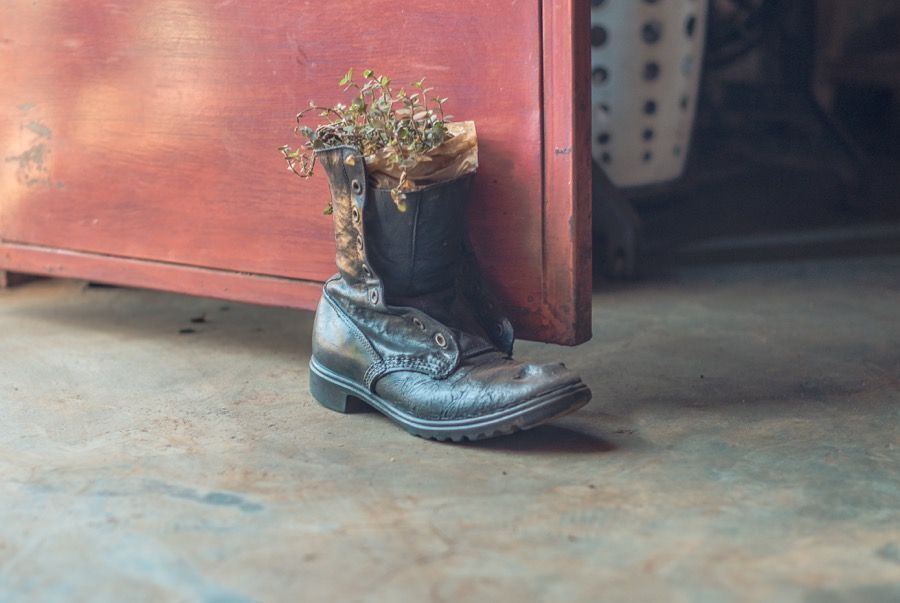 Chef Tom says he wore these boots to farm, in the year the Kitchen unexpectedly closed. They now hold the door open. Literally and figuratively. Mostly metaphorically

All photos are by Mburu Muriithi, of Nyuso za Nairobi, for Craft It. Image copyrights apply. None of these photos can be used elsewhere without the express permission of Craft It.