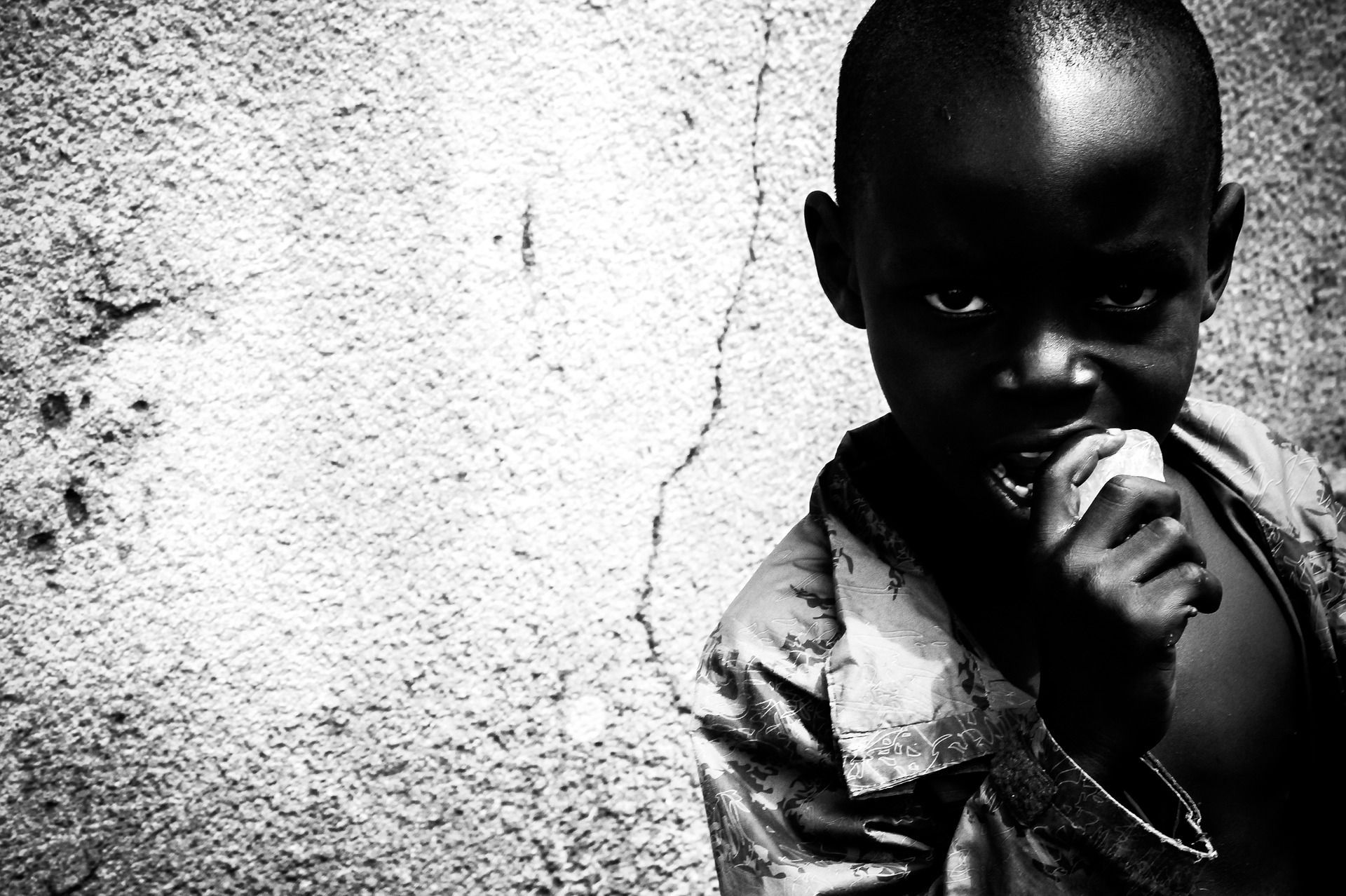 The lollipop man outside Airtel lifts the stop sign at the zebra crossing. The cars at the front, on Mombasa Road, turn on their blinkers and there’s a red patch in the horizon. Said patch was a Subaru Forester. Minutes earlier, I had exchanged glances with the driver. His fat exhaust pipe sounded like fireworks and he wore a brown hat and he looked a stereotype.

And I thought, Are you for real right now?

On some other day I’d have probably wanted his car. I’d have liked to hold the wheel with one arm and switch lanes unnecessarily. I’d have liked to play loud music and floor it. But this time – at the zebra crossing – my attention was drawn towards a bike.

A boy can dream, surely. The thing was mouth-watering as hell. The rider had one foot on the ground as we all waited for the lollipop man to turn green.

I imagined myself jumping on that bike pointing at the Subaru and shouting, “Follow that car.” I’d have wanted to tell the stereotype what I really thought about his hat by flipping him the bird. What an ass.

Now the last of the pedestrians were emptying out of the road. There was a man with an envelope and another man with a briefcase and a lady with a weave. The sun was eclipsed and in its place, a cloud, a white beast with a grey heart. The lollipop man flashed the ‘Go’ sign and all the cars took off like frightened hares.

I was dropping Mom off at the salon before heading to school but, as always, I was in no particular hurry to get there. And it’s not like Mom likes it when I’m speeding anyway.

I hadn’t even finished taking my foot off the brake when I noticed there was something off about the car on my right. The back seat was crammed and the woman riding shotgun had the biggest afro I had ever seen. The car was in a rush – the way it tried to wiggle about.

And then I saw a head stuck out the back-left window. It was a small brown head with very little hair. At first I thought it was just an excited kid who wanted the wind in his face. I thought maybe he also wanted to take a look at that sexy bike that was now charging away. I fancied maybe he also thought of giving the Subaru the finger.

But a second look revealed a boy in distress. His mouth was open and rounded – torrents of yellow vomit poured out, and some of it trickled down the car’s side. The remainder splattered on the tarmac.

The boy kept his eyes down, probably not wanting to see all the attention he was getting. You could see the wave of throw-up coursing through his body; moving up his throat and gushing out like a hose. Boy did people stare. All the necks on the matatu on my left were craned.

I felt sorry for the boy. The last thing I would have wanted is everyone in an Embassava mat looking at me as my gut exploded. Was he car sick? How soon would it be until he got over it? Or did the noise of that Subaru disturb his breakfast? What an ass.

The incident made me think of Joyce.

If you wanted to sound a bit cool you called it MIEC. If you had the energy and the extra saliva you said it in full: Mary Immaculate Educational Complex. Or you could just say Mary Immaculate.

Whichever way you said it, the place reeked of intense intolerance to indiscipline.

The first time I ever walked through the gate I saw the school’s motto and mission and vision painted on the classroom blocks in blue. The mission was a mouthful, and it was the first time I was seeing the word ‘norms’. And I remember thinking: Hm, what a sweet sounding word. Norms. The way it sits in the mouth. Norms.

It was a catholic school. Run by nuns. Not all the teachers were nuns though. I was in Class Six when I got admitted. That first week was filled with confusion and clangor. There was to be a new deputy and every one would go on about how nice the previous deputy was.

It didn’t matter to me. All I cared about was blending in so I could quickly lose the title of ‘new-comer’. I didn’t know much about the school. But from what I could tell, you were supposed to bow every time you came by the Virgin Mary’s shrine. You were also meant to develop a thick skin because those nuns were merciless when it came to a beating. It was the norm.

On the third day I found out there was a teacher called Joyce. She only taught the kids in lower primary. And the instant I laid my eyes on her I wished to be back in Class Two. Teacher Joyce was a real beauty. She had big eyes and her hips swayed with every step. Her wardrobe was mostly skirts and heels and she was the only teacher that drove to school.

She had one of those flirty smiles. I fantasized about Teacher Joyce a lot, the way her soft curves of her body lined her skirts. Geez. Teacher Joyce was fine as hell. I’d imagine her holding my arm and leading me to her car where we’d kiss and grope and the nuns would never find out. Ha-ha.

Sometimes, when she was on duty and I’d arrive late to school, she’d punish me by making me run around the field. She’d stand there and watch me huff and puff. In my head I thought she enjoyed watching me run. She must have punished me hundreds of times. And each time I’d blame the traffic and have another story.

Enter the new deputy. Enter Sister Mary Joyce. Like most of them, she was a no nonsense nun. Her skin was light and her legs were stumpy and her body was full but not plump. Without her specs she looked like the people whom the name disciplinarian was made for. She’d scare the shit out of us and anyone who had been to her office had a scar and a story to tell.

By that time I had accepted that Teacher Joyce and me was never going to happen. I had moved on. Now I was looking closer home. I wanted a girl I could actually talk to, or kiss, for that matter. So what I did, I got myself a girlfriend from my class.

It was a secret affair. If the admin ever caught wind of that story it would cause major scandal. Hugging was a sin. Kissing would be punishable by public execution. The concept of boyfriends and girlfriends was simply unheard of and anyone suspected of having such a relationship risked the wrath of Sister.

But jealousy ran high in MIEC. It wasn’t long before someone ratted out the love birds. I got the news during break time.

I was lounging outside class when someone tapped my shoulder and said, “Michael, unaitwa na Sister.” The message was delivered with a sly smile. And I instantly knew why.

My heart sank. Sister Mary Joyce. I was surely going to get my ass handed to me. While I made my way to the office I wondered what reason I could possibly give for having a girlfriend. Hell, I even thought of saying there was traffic –if only to escape the inevitable beating. I was scared shitless.

I got to her office trembling like a leaf. She lifted her face as I neared her desk and asked, “Are you the famous Michael?”

I stood there looking down at my feet.

“I will give you a few strokes so you won’t repeat again.”

But she didn’t cane me. She said to come back tomorrow because this was a serious case and that there would also be some counseling. I went to bed full of dread that night, thinking that maybe I could feign illness and get a day off.

The next day – as Ol’ Man was dropping me off at school – I was so anxious I couldn’t breathe properly. I would shut my eyes and see Sister Mary Joyce standing over me with a stick. I could see my parents sitting in her office, being told how naughty their son is.

My breakfast couldn’t sit. I threw up in the car and got some of it on the dashboard. Ol’ Man took me back home and I thought I had dodged a bullet.

The next day, however, I went to school and someone was sent to call me from class. I got the beating of a lifetime –with extra for skipping school. Geez. There was no escaping the wrath of Joyce.

And as I looked at that boy with his head out the window I wanted to tell him not to worry. That he’d get better.