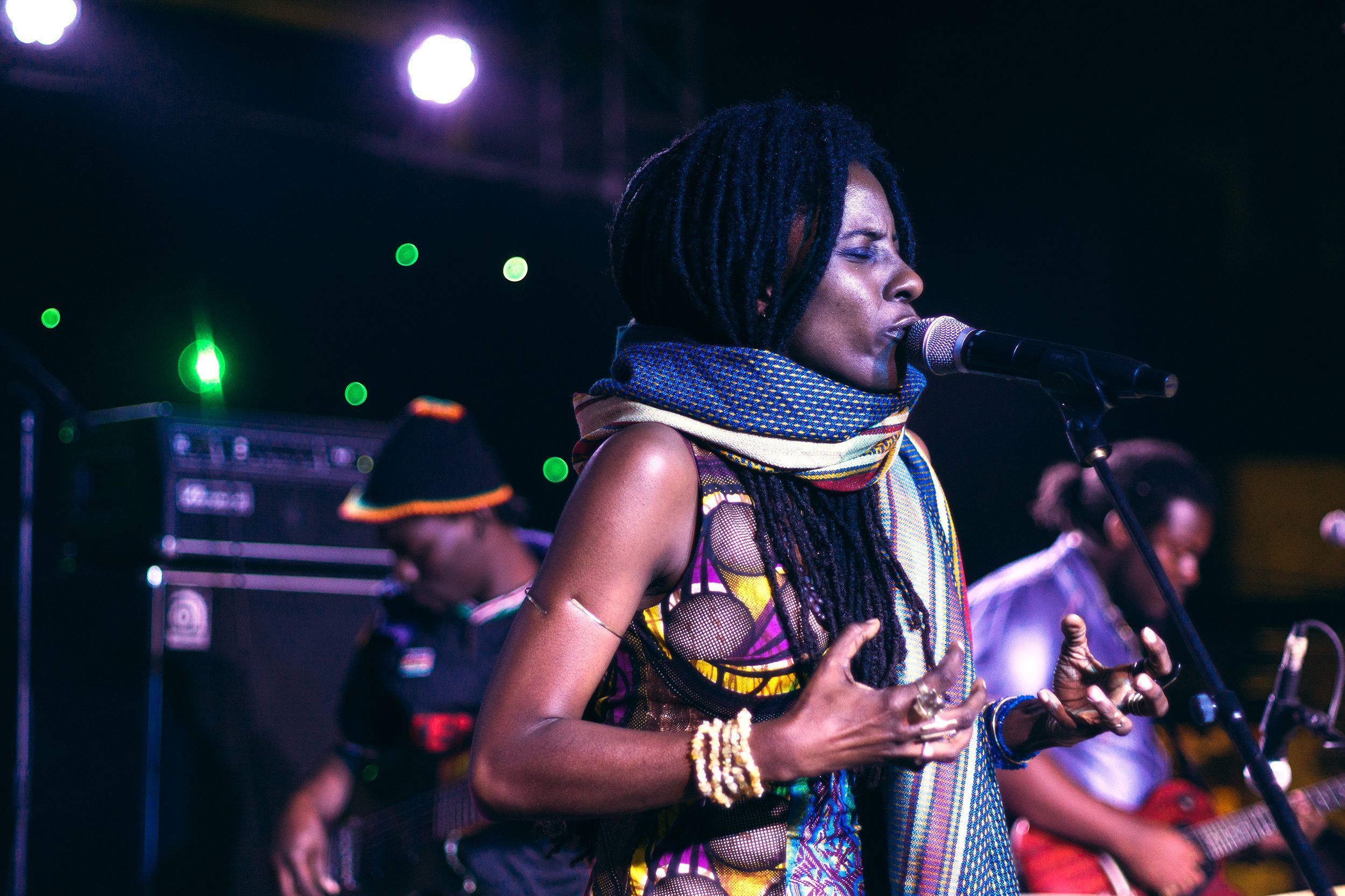 After what feels like house arrest since the State of Emergency, you finally hit the nightclub. Your baby is a year and three months now. Which means she’s not a baby any more – she’s a toddler. You are parenting a toddler.

Being a toddler means several things: it means she’s fallen into a predictable routine. It means she’s breastfeeding for fun (not for comfort and cuddles, that’s all for you). It means she’s eating bigger portions of food and clearing her plate with little fuss. (She surprised you last Saturday when she wiped that plate of omena clean then burped like a teenage boy. She was a serviette away from asking for a toothpick.) It means she’s sleeping in her bed, in her room, until dawn.

Toddler means a night out guilt-free. You got your groove back, Stella.

You stand infront of your closet and think hard about what you’ll wear to the club. Your body has changed since pregnancy then giving birth. Your breasts are bigger – less perky, more saggy; they have a certain buoyancy your padded bras can no longer contain. Your ass looks like a tabletop; flat and wide. There’s a wiggle and jiggle in your thighs when you walk, a thunder clap that scares even you. And to crown it all, you have your glorious mommy pouch. Oh, that mommy pouch. That flab that sits around your tummy – where your bump used to be – and hangs over your pelvis. Think of it like wearing a waist bag.

Right after you gave birth, you made the mistake of not tying a leso around your bump because you were worried that the tightened leso would cause your C-section stitches to burst open. You even imagined a gory scene where your insides started to leak and you had to rush to the obstetrician’s to have him fix it. Your pelvic muscles eventually lost elasticity and didn’t return taut to their place. Thus your pouch.

You’ve been hitting the gym but your personal trainer says the results won’t show until after three months of a consistent program. It’s only been a week. A goddamn week.

Speaking of which, in the weeks after you returned to work, you had a phase you called ‘Getting back into Society’. It was a rough phase for you: you didn’t feel confident or sexy anymore, mostly shapeless; you had painfully lost the art of conversation; you were impatient to the reality that everyone had moved on with their lives, no one had paused theirs to wait for you; you weren’t in the right frame of mind to get your writing done, mostly because you were still hormonal and because you couldn’t stop thinking about your Pumpkin you’d left at home; none of your old clothes fit like they used to; you had to wear an expressing-friendly outfit because, well, because you had to go to the Mother’s Room at some point of the day to express.

The highlight of the ‘Getting back into Society’ phase was how short the days seemed to feel – it would be 9AM, you would be at the bathroom sink brushing your teeth. You would look down into the sink to spit and gargle some water, and when you brought your head back up again, the sun had set and it was dark outside and you would be reaching for the toothpaste to start brushing your teeth again because it was 9PM.

It was an endless where-did-the-day-go cycle. An endless and frustrating cycle. That phase is long gone now but you shiver every time you think about it.

Because it’s a nightclub and because you want to feel sexy you settle for a pair of heels and tight blue jeans. But hang on, do chicks still wear jeans to the club? Will you look like you’re there for a promo, pushing product for some local low-end whisky brand? Will someone tap your shoulder on your way to the washroom and ask you to check how far their burgers are? “Madam. Excuse me, excuse me?” he’ll say, buzzed and irritated. “What’s with it today?”

“You guys used to have such great service when you opened! What happened to you guys? Huh, what happened?”

Sorry, I don’t know what…

Look, Sir. You have me mistaken for….

“Please just sort it out. Please? Darling? Please.” He presses the receipt into your open palm and closes your fingers over it. It’s that warm broken smile that makes you turn away instead of fixing the mistaken identity.

You pair your jeans with a beige blazer; it has stripes and a frilly tuxedo tail at the back. It reflects a lot of light. You feel like a magician’s assistant. You ditch your glasses for contact lenses and your Vaseline for some powder foundation. You find yourself slathering a tad too many layers that you end up looking ghostly. And insecure. Lip-gloss ties up your final look. Never mind that everyone stopped wearing any in 2008.

It’s 10PM when you and your boy check into Js Fresh Bar & Kitchen on Muthangari Drive. You’ve never been here before, let alone heard of it – it was your boy’s idea that you come over because he knows you’ll dig it. “Choices doesn’t have band night on Thursdays anymore,” he had informed you on the drive over. “They all moved here, even that Jibril guy. And Js used to be Fred Gumo’s house.” You had nodded and swallowed this piece of information like it was some piece of pastry he’d handed to you. What else had happened while you were away? Had we lost our President?

It’s a weeknight, which means it’s band night at Js. Harry Kimani is on stage strumming his guitar infront of the mic. He has a post-rehab glow; healthy and religious. A small crowd has gathered at the bottom of the stage, right beneath his feet. They have their hands in the air and are swaying from side to side, like maize in the wind of an African farm. Harry Kimani sweeps his eyes over the crowd every so often and winks and smiles at one of the female fans, sometimes pointing at a male fan and giving him a hey-there nod.

Harry Kimani is doing a Bob Marley cover. He will later play ‘Haiya’, right before he calls it a night and jumps off the stage to head back home.

You and boy sit outside, underneath the stars and the string of light bulbs. Underneath the signage that says ‘No Table Service’. Underneath the silvery moon. It’s a warm night. It had rained on some loose day earlier that week and now the air has the rich balance of crisp, cool and humid. Of romance. It feels like the night is whispering a secret to you.

You spot an old acquaintance in the table behind yours. What are the rules of engagement? Do you go over, give her a hug and say ‘how have you been’? Is it OK for her to leave lipstick marks on your cheek, or worse, your jacket collar? Do you ask her what she’s having and motion the waiter to top it up? Do you throw that into your boy’s bill or yours? Heehe. What about her pals around the table, do you do the same for them?
Or do you totally ignore all of that and simply wave to her from where you are and mouth the words ‘you look smashing!’? You opt for the latter.

You order a mojito. You like how exotic that sounds, ‘mojito’. You liked to drink Vodka before you had your baby – double Vodka, tonic and two slices of lemon, that’s how your order to the waiter always used to go – but now you can’t stomach that poison anymore. Even thinking about that word ‘vodka’ makes you want to spew your guts out.

As you wait for your mojito to arrive, you chitchat with your boy’s pals around the table – loose banter that seems oddly intelligent. Everyone laughs even though the jokes aren’t that funny, everyone is in their best form tonight, everyone is flirting with each other. You pinch your boy’s thigh under the table. He chortles. You bite your lower lip then sip from your straw as you give him a half-eye sexy stare. Someone’s getting lucky tonight.

The mojitos hit the sweet spot pretty fast. It’s midnight. You want to dance so you get up and sashay next to your table. Everyone looks up at you and gives you an approving you-go-gal air punch. You wave your hand dismissively like it means nothing but you know damn well it means everything. You are tearing it down!

The night carries on with this languid abandon.

It won’t be until the next day when you’ll be at your desk at work that you’ll remember what a swell time you had. A really swell time. You’ll recall little bits and pieces of the evening – that moment when Harry Kimani got off the stage briefly and they played that Bongo track by Darassa and everyone around your table sang along. Or when you looked at your watch and didn’t quite register the time because you didn’t want the hours and minutes to get in the way of your fun. Or when you looked up to the sky and shut your eyes to soak in the energy of this painfully beautiful urban night. Or when you went upstairs to take a leek and rudely swung the bathroom door open to find Miss USA-Kenya sitting on the bowl, and you went ahead to have a quick convo with her.

You’ll also think back to a year before, when your baby was three months old and motherhood felt like an infinite stretch of breastfeeding and burping, expressing, drinking gallons of uji and sterilizing bottles, poor sleeping habits. A general feeling that you had lost sense of who you were and what you loved to do. You missed your gals, you missed hanging out with them. You missed being at work. You missed being in a meeting with your mouthy boss and going to lunch with your pal. You missed the orgasmic feeling of beating a deadline.

You constantly wondered if this was all there were to being a mum, and to your new life as a mum. You urged yourself to be patient and positive, and reminded yourself – over and over – that babies grow. That life goes on. That she needs you most right now. That you are nailing it. That you can do it! That you would actually miss staying up with her into the wee hours before dawn, and those afternoon naps you took with her in your bed, when she nuzzled so close to you it’s like she wanted to return into your womb.

You reminded yourself that motherhood doesn’t define you.

You’ll also recall how anxious you were about going back to the normalcy of your routines – the ones beyond your front door – because you didn’t know how it would play out with a baby in the picture.

Such bit and pieces. Bits and pieces that are far from ordinary to the mum who’s getting her groove back.

You order your third then fourth mojito.

At 2AM you and your boy nip into a late-night fast food in Westy for fries and flame-grilled chicken before you head home. You had forgotten how mysterious the city is at this hour. You giggle and shush each other as you glide into the bedroom. You kick off your heels, throw your bra across the room and jump into bed with nothing but your underwear on.

You feel your head bob and the room spin: those mojitos weren’t such a good idea after all.

An edited version of this story first run in the April-2017 issue of True Love Magazine.
Photo credit: Silot Gallery